by the Editors of Publications International, Ltd. Aug 14, 2007 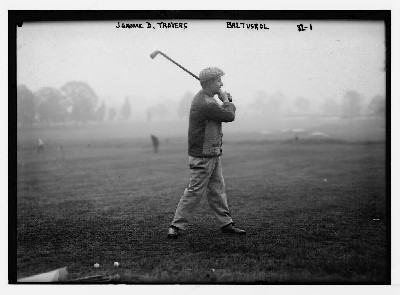 Jerome Travers was the closest thing to a dominant player in the decade preceding World War I, thanks in part to his calm demeanor. See more pictures of famous golfers.

Jerome Travers is one of golf's most enigmatic champions. He is one of only two players to win at least four U.S. Amateur titles (Bobby Jones won five).

Travers was born on Long Island and came under the tutelage of Alex Smith at Nassau Country Club. He developed a rivalry with three-time U.S. Amateur champion Walter J. Travis, another Long Island resident. Travers, then 17, defeated the 42-year-old Travis in the 1904 Nassau Invitational. Travis knocked off Travers in the quarterfinal of the 1906 U.S. Amateur, but thereafter Travers had the edge on his older foe, beating him five times in the U.S. Amateur.

Travers's first two U.S. Amateur victories were romps in the finals, 6 & 5 over Archibald Graham in 1907 and 8 & 7 over Max Behr in 1908. Travers didn't enter the next two U.S. Amateurs. It is not known why, although it is possible that he chose to play only when he felt absolutely ready.

Though he was one of the game's toughest competitors and owned an excellent short game, Travers was a wild driver and sometimes resorted to hitting irons off the tee.

Before 1915, he had entered only three U.S. Opens, finishing no better than 25th. But that year at Baltusrol, he played the last six holes in 1-under to score a one-stroke victory over Tom McNamara. It was the last Open he played in. He didn't play in another U.S. Amateur either, saying it wasn't possible to both earn a living and play championship golf.

Travers's trophy collection included hardware from one U.S. Open and four U.S. Amateurs -- all four won by routs in the final match.

Who built the first miniature golf course?
Winning the Green Windbreaker: Inside the Real World of Pro Mini Golf
What is the history of golf?