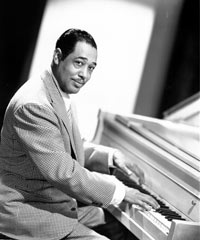 Edward "Duke" Ellington (1899-1974) was born in Washington, D.C., the son of a White House butler. He began his career as a piano player at the age of 7, and as a composer in his teens. At 17, he dropped out of school to play music. He formed a band, the five-piece Washingtonians, in 1923 and moved to New York. The Duke, as his friends called him because of his fine taste in fashion, got his big break in 1927 when the Washingtonians won a residency at the legendary Cotton Club. Ellington left the Cotton Club in 1931 for a tour that didn't stop until he died in 1974. He scored films and Broadway shows and left behind a vast body of work in several styles of jazz -- classic, orchestral, big band and swing.

Louis Armstrong (1901-1971) was born in New Orleans and dropped out of school to play music. Often called the "Ambassador of Jazz," Armstrong was arguably the most influential jazz artist of all time. He came to popularity at the height of the Jazz Age, emerging as the first important soloist to come out of the collectively focused movements of Chicago and New Orleans jazz. In 1917, he took part in the first jazz recording to be released to a wide audience. Armstrong taught himself to play the cornet as a boy and later turned to the trumpet. He took an active role in several movements of jazz and shined as an innovator throughout his career. Later in life, Armstrong found fame as a vocalist and pop star and appeared in several motion pictures.

Charlie "Bird" Parker (1920-1955) is believed by many to be the greatest saxophonist of all time. Born in Kansas City, Parker dropped out of school at 14 to start what would be one of the most important careers in the development of jazz. By his late teens, "Bird" the alto saxophonist was well on his way to becoming a seminal figure in jazz. A founder of bebop, he had a pervasive influence by the 1950s. He became the measure by which jazz musicians were judged and a point of reference for all soloists. But Parker's legacy is marked by addiction and tragedy -- he died at 34 after years of heroin abuse.

­­John Coltrane (1926-1967) was born in Hamlet, N.C., the son of an amateur musician and multi-instrumentalist. He first played the E-flat horn and the clarinet and eventually transitioned to the alto saxophone. Later, he switched to the tenor sax -- some believe to distinguish himself from Charlie Parker. Upon his release from the Navy in 1946, Coltrane was a sideman on other musicians' recordings and performances. Miles Davis hired him to play in his band in 1955, though the relationship was tumultuous because of Coltrane's heroin addiction. Coltrane's solo career officially began in 1960, when he was 33. He emerged as one of the most important musicians in jazz history but had a short career. Like Charlie Parker, Coltrane died (at the age of 40) after years of hard living and drug addiction.

Miles Davis (1926-1991) was born in Alton, Ill. At 12, he took his first trumpet lessons, and he was playing in bars at 16. Davis found his first break in Bill Eckstein's big band that featured bop founders Charlie Parker and Dizzy Gillespie. After moving to New York to study at Juilliard (then called the Institute of Musical Art), Davis began playing with Parker in Manhattan clubs. In 1949, he broke away to form his own nine-piece band, which played a new, relaxed, "cooler" style of jazz. The release of "The Birth of Cool" in 1957 led to the birth of cool jazz (or West Coast jazz). Davis was prolific in his experimentation and innovation and figured prominently in nearly every movement of jazz. Having overcome an addiction to heroin several decades before, Davis died in 1991.

Want to start a jazz collection but don't know where to start? Check out the next page for some advice.