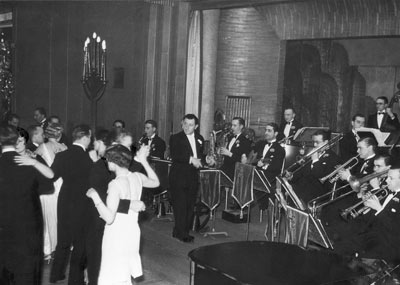 From the very beginning, jazz has been about freedom, movement and individual expression. Its break from musical tradition and emphasis on improvisation and innovation set it up as the backdrop to cultural changes, and it influences international culture today. Jazz is played, with its own local flair, on every continent.

­­During Prohibition and the economic prosperity of the 1920s, jazz became the soundtrack to parties in underground clubs, called "speakeasies," where pleasure ruled and outlawed liquor was consumed. Because of its roots in African-American culture, and the places, occasions and activities with which it was associated, jazz initially bore the label of "low culture."

After World War I ended, people wanted a fresh start and the end of tired social customs. For the first time, African-American culture became a hot commodity, which did much to elevate the position of the African-American in society. But this didn't happen without resistance from groups like the Ku Klux Klan, who continued to systematically oppress and brutalize African-Americans. Still, the prominence of jazz grew and changed the trajectory of American music forever.

The free-spirited nature of jazz spread throughout American culture. Women began to break out of traditional sexual roles, shunning conservative clothing and behavior for a newfound freedom and independence from men and obligatory roles within families. Jazz made room for women to work as performers and provided many other jobs for women in the music industry. F. Scott Fitzgerald captured the essence of the era in his 1925 novel, "The Great Gatsby" -- the story of a high-profile bootlegger, his lavish parties and the frivolity of the characters surrounding him. In Harlem, jazz music rode in tandem with a cultural renaissance among African-American writers and artists of all kinds that was felt throughout the United States.

­­­­At the height of bop in the 1940s, literary artists like Jack Kerouac and Allen Ginsberg of the Beat Generation found inspiration for innovation of their own. Beat writers and their contemporaries admired the spontaneity and free form of jazz. They worked to implement its syncopated rhythms into the meter of their poetry, which they performed live with a backdrop of jazz.

­From the Jazz Age of the 1920s through the swing era of the 1930s and '40s, jazz was the heartbeat of youth culture. Jazz is responsible for influencing a multitude of artists and genres. Rap, R&B, pop, soul and "girl groups" like the Supremes are all heirs to jazz. Today, new generations of musicians and vocalists, like Wynton Marsalis, Cassandra Wilson and Amy Winehouse, continue to celebrate jazz by reinterpreting the classics and creating new musical expressions.