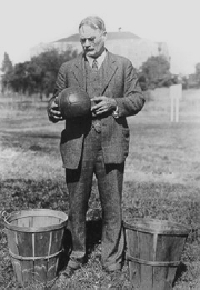 Naismith died in 1939, the year of the first NCAA Tournament and seven years before the birth of the NBA. See more pictures of basketball.

During the snowy winter of 1891 in Springfield, Massachusetts, fertile minds were at work inside the local YMCA. Dr. Luther Gulick, head of physical education at the Y, had decided that a new indoor game was needed to bridge the gap between football in the fall and baseball in the spring and summer.

"Like any good leader," wrote Nelson George in Elevating the Game, "(Gulick) passed the ball to his subordinates. Two YMCA instructors failed in attempts to create a satisfactory game before the assignment fell to Dr. James Naismith, a thirty-year-old Canadian with degrees in medicine and theology. Naismith's face was dominated by a thick mustache that engulfed his lips and gave him a dour, melancholy look consistent with his intense manner. Gulick gave him two weeks to conceive 'something,' and, according to legend, on the fourteenth day Naismith 'birthed' basketball."

Naismith's game featured bouncing or tossing a soccer ball into peach baskets suspended from balcony railings at either end of the gym. Players were not allowed to run with the ball, but instead had to advance it with passing.

The goal was placed 10 feet above the floor to promote skill development, and games were divided into two 15-minute halves, with a five-minute intermission. The original rules stated that "any number can play," though the first games played at the Springfield Y were nine-on-nine affairs.

Basketball's popularity quickly spread through YMCA's in the East and took less than a year to reach the West Coast. Naismith moved to Colorado in 1895 to become the director of the Denver YMCA, and in 1898 he became director of physical education at the University of Kansas, where he remained the rest of his life.

Although he introduced basketball at Kansas and coached the varsity team for eight seasons, Naismith contributed little to coaching theory and received only passing recognition during his lifetime for inventing the game. According to one biography, "his life-long association with basketball remained largely honorific or ceremonial."

Born November 6, 1861, in Almonte, Ontario, Naismith died in 1939, and his book Basketball: Its Origin and Developments was published posthumously in 1941. The Naismith Memorial Hall of Fame in Springfield was named in his honor in 1959.