The World is Not Enough: Comics, Games and Parodies 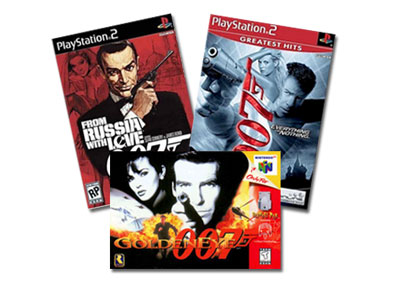 The James Bond franchise has spawned three popular video games: "Goldeneye 007," "Everything or Nothing" and "From Russia With Love."
Image courtesy Amazon

James Bond has found success outside of films and novels. A radio adaptation, a series of newspaper comic strips and numerous graphic novels have all featured Bond, either in original stories or versions of the films or novels. However, the most successful non-film medium for Bond has been video games. 1997's "Goldeneye 007" for the Nintendo 64 was a smash hit -- many people continue to play it, although the system itself is outdated.

Numerous variations on that game's "first-person shooter" formula attempted to recapture that success, but 2004's "Everything or Nothing" was the next big success. The use of popular actors (including Pierce Brosnan) to perform the voices boosted interest. The concept was taken a step further with a video-game version of "From Russia With Love," which featured the voice and likeness of Sean Connery.

Bond's popularity has inevitably led to imitation and parody. Comedy series like the cartoon "Inspector Gadget" took elements of James Bond and mined them for material. The 1967 parody of "Casino Royale" even featured multiple James Bonds (including a villainous one played by Woody Allen), and part of the plot involved recovering the hairpiece worn by the deceased M.

Perhaps the most well-known Bond parody is Mike Myers' "Austin Powers" series. In these films, the secret agent is thawed out after several decades of being cryogenically frozen, which explains why he retains his "swinging '60s" attitude and fashion sense. Powers twists around Bond's way with women: instead of a suave one-liner, Powers simply waggles his eyebrows and asks overtly sexual questions. The lead villain, Dr. Evil, looks and acts much like Ernst Stavro Blofeld.

James Bond is more than just a fictional character: The franchise has defined the espionage thriller and will surely influence this genre for decades to come. For more information on Bond and related topics, check out the links below.