Bonds on Film: Actors and Elements 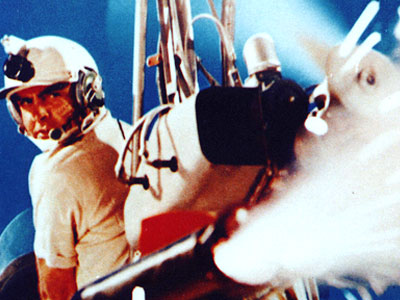 The first screen appearance of James Bond was in a pilot for a CBS TV series. Based on the novel "Casino Royale," the pilot flopped and the series was never made. Fleming's novels would eventually be made into a successful series of films, starting with "Dr. No" in 1962. The 20 official Bond films released since then (prior to the release of 2006's "Casino Royale") have made about $3.8 billion worldwide, and over $1.2 billion in the United States [Source: Giammarco]. Five different actors have played the role of James Bond in the official films (There are three unofficial films: the CBS pilot, a 1967 spoof of "Casino Royale," and 1983's "Never Say Never Again," a remake of "Thunderball" that arose from a complicated copyright entanglement). Daniel Craig is the sixth Bond, appearing in the 2006 "reboot" of the franchise.

Sean Connery was the first James Bond, playing the role in six movies from 1962 to 1971. Although Fleming reportedly disliked Connery at first, he was eventually won over, even working a Scottish father into the literary Bond's ancestry to reflect Connery's own background. Connery's Bond was closer to the version depicted in Fleming's novels, though he did inject more humor into the character.

George Lazenby took over the role for one film, "On Her Majesty's Secret Service," in 1969. Having had no prior acting experience, Lazenby's performance is largely derided by most Bond fans. In fact, his acting career virtually ended after that film, and Connery took the role back for one more official Bond film in 1971.

From 1973 to 1985, Roger Moore left an indelible mark on the Bond character. Moore’s Bond is generally kinder and more genial than Connery's, and this era gave birth to some of the more outlandish exploits, involving space stations, superlasers and other science-fiction elements.

Timothy Dalton's two-film run in the late 1980s was seen by many as a return to the character's roots. The Dalton films are darker and more cynical. However, lawsuits tied up the Bond franchise for several years, and when they resumed in 1995, it was time for a new Bond.

Pierce Brosnan, the fifth James Bond, in the 1999 film "The World is Not Enough."
Image courtesy DANJAQ/EON/UA/The Kobal Collection

Pierce Brosnan played Bond four times from 1995 to 2002. For younger fans of the series, he is the only Bond. His wry smile and dry wit are reminescent of Roger Moore's portrayal of Bond, but Brosnan also guided the character forward.

Daniel Craig is the sixth actor to play Bond and is also the only blond to take the role. Including 2006's "Casino Royale," he is signed to a three-film contract. Like all other "new Bonds" before him, Craig's selection caused some controversy and angered some fans of the series.

The Cold War and anti-Nazi plots of the '60s and '70s were outdated by the time the franchise started up again in the mid-1990s, so the modern Bond became tied up in media wars, terrorist plots and high-technology threats. Although each film is unique, they tend to contain certain elements:

The core of any Bond film is the fast-paced action. Car chases, daring leaps from buildings or mountains, hand-to-hand combat, gunfights, narrow escapes from death traps, even boat and airplane chases are all vital to the success of a Bond film. Bond always pulls off these sometimes preposterous sequences with panache and style.

A Bond film is not a gritty exploration of the espionage underworld or a high-minded glimpse into global politics. Even at the most tense moments, Bond finds time for a one-liner, dryly delivered with a half-smile.

There is never any graphic sex or nudity in a Bond film, but 007 is with a gorgeous woman at least once in every movie. Even more conspicuous than these tame scenes is the dialogue between Bond and his female co-stars. Puns, innuendos and barely-veiled references to sexual activity are sprinkled liberally throughout the script.

The newest James Bond with one of the newest "Bond Girls": Eva Green as "Vesper Lynd." All Bond films have at least one of these beautiful, dangerous women. Bond's interaction with her is a crucial element of the films.
Image courtesy Sony Pictures Classics

James Bond doesn't get into a car chase while driving a Pinto through Detroit. He drives a Lotus Esprit along a winding mountain road that overlooks a stunning rainforest. His cases take him to golden beaches, vibrant jungles, even crystalline ice palaces. A mission might require him to attend a high-cost charity auction held in the penthouse of an expensive hotel.

The selection of each Bond Girl is almost as anticipated as the casting of a new James Bond. A Bond Girl is not just beautiful -– she is also a "femme fatale," a woman that will cause Bond great trouble when he inevitably finds himself attracted to her. Some of them are outright villains, while others have their own tragic stories and vulnerabilities that make Bond feel protective. Bond usually wins the girl, but sometimes she betrays him and sometimes she dies in his arms.

Next, we'll look at the world of James Bond beyond the novels and films.

Some scholars believe that philosopher, scientist and astrologer John Dee was the original 007. In the 16th century, Dee served as an adviser to Queen Elizabeth I. Dee signed his messages to the Queen with two zeros -- symbolizing his job as the Queen's eyes -- followed by a seven with the top drawn out across the zeros. This seven reportedly had some occult meaning to Dee. So, his "codename" was 007, and he performed espionage and counterespionage activities in the Queen's service.