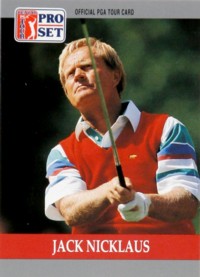 Jack Nicklaus experienced a rather cruel and unfair welcome to the major-league golf scene. How he handled it indicated that this was a man of great self-control and confidence, and one that had the instincts of a gentleman.

All of these traits would become implicit as time went on, as Nicklaus would become one of the most dominant golfers in the history of the game.

When Jack Nicklaus won the 1962 U.S. Open, at historic Oakmont C.C. near Pittsburgh, it was his first victory as a professional. However, this superb achievement was clouded by the fact that he defeated Arnold Palmer in a playoff for the title.

Palmer was at the height of his game and seemingly invincible as a player, and with his common-man, boy-next-door manner, he had reached an incredible popularity among the golfing public.

Nicklaus, on the other hand, was rather overweight and had the air of a pampered country club golfer. Indeed, as everyone knew, he did grow up in a private club setting.

Thus, when he defeated Palmer rather handily in the playoff, not only outplaying but outhitting Palmer off the tee, he was treated with disdain. How dare he do this to "our Arnie?" Nicklaus suffered many sly indignities from galleries as well as some outwardly rude references to his weight.

But through it all, Nicklaus never complained about the treatment. He took it in stride. As he did in his golf, he wore everyone down and brought everyone to his side with his consistently outstanding golf and superb sportsmanship. He was a champion in every way.

When Nicklaus romped to victory at the 1965 Masters, Bobby Jones remarked that Nicklaus was playing a game "with which I am not familiar."

Jones was no doubt referring to the height of Nicklaus's shots with the long irons, which in fact enthralled everyone. They had an unusually high trajectory, the balls seeming to hang forever in the air before landing softly. They also carried astonishingly in their distance.

But Jones, a most astute as well as articulate observer of a game he himself had mastered like few others, also had in mind Nicklaus's exceptional putting touch on fast greens as well as a level of poise under pressure that was incredible for so young a man. What would make all these attributes all the more exceptional was the length of time that they persisted.

Jack William Nicklaus was born in 1940 in Columbus, Ohio, the son of a pharmacist who at one time owned a small chain of local drugstores. Young Jack had good genes for athletics, as his father had been a fine athlete in a number of games.

Jack got quality instruction from the very start. His teacher was Jack Grout, who had been a fine player and became an even finer instructor. And he learned to play on one of golf's better championship layouts, the Donald Ross-designed Scioto C.C., where the Nicklauses were members.

Nicklaus showed he had the stuff of great golf almost from the day he took up the game, at age 10. Three years later, he shot a 3-under-par 69 at Scioto.

It only got better. Much better. Nicklaus won five consecutive Ohio State Junior championships, beginning at age 12, and when he won the 1959 U.S. Amateur, he was at 19 years and eight months the youngest winner of the championship in 50 years.

The '59 Amateur came down to the last (36th) hole of the final. Nicklaus needed a nine-footer to close out 35-year-old Charlie Coe, who had twice won the title. He drilled it into the center of the cup.

For all his prodigious length off the tee, that kind of clutch putting within the 15-foot range (and sometimes much longer) was perhaps the most distinguished characteristic of his game throughout all his competitive years.

While a student at Ohio State University, and No. 1 on the golf team, Nicklaus won another U.S. Amateur, in 1961. That year he also won the NCAA Championship, the Western Amateur, and the Big Ten championships; played Walker Cup golf; and finished fourth in the U.S. Open.

Having conquered the amateur golf world, he turned professional. His first outing as a regular on the PGA Tour, the Los Angeles Open in January 1962, was in retrospect curiously inauspicious. He finished well down the list and won less than $100.

He continued to struggle through the winter while getting used to the travel -- a new town and bed every week, restaurant food daily -- and playing on the heavily trafficked public-fee courses that were not in the kind of condition to which he had become accustomed.

On the other hand, he finished in the money in all 26 events entered and eventually won three times, including his historic U.S. Open.

From that point on, he would set competitive records that may well never be matched. In the next 25 years, Nicklaus won 67 more tournaments on the PGA Tour (including six Masters, four U.S. Opens, and five PGA Championships) and 18 abroad (including three British Opens).

His 20 major titles, including the two U.S. Amateur titles, are seven more than anyone else. Even the greatest of athletes do not win every competition they enter, and in golf that is especially the case.

The next and perhaps more meaningful measure, then, of a player's talent is how close he has come to winning those times in which he doesn't in fact walk away with the victory. In this, Nicklaus is far and away the champion of champions.

To refine this aspect of his record even more, from 1962-79 -- in a total of 335 PGA Tour events -- Nicklaus missed the cut a mere nine times. More to the point, in the major championships in which he made the cut from 1962-79, Nicklaus's average finishes were sixth in the Masters, 11th in the U.S. Open, fifth in the British Open, and eighth in the PGA.

Of course, Nicklaus set many scoring records along the way. His 271 at the 1965 Masters smashed Ben Hogan's tourney record by three shots, and Jack won the tournament by nine. At the 1967 U.S. Open, Nicklaus drained a 22-foot birdie putt on the 72nd hole to break Hogan's Open record. The 275 mark stood until 1980, when Nicklaus, age 40, shot a 272.

Jack's greatest year was 1972, when he prevailed in the Masters, U.S. Open, and five other Tour events; he lost the British Open by a stroke. The years 1962-79 were essentially Nicklaus's prime years, but he would retain his incredible competitiveness beyond the time when most athletes, great or otherwise, are contenders.

He had been the youngest to ever win the Masters, and in 1986 he became the oldest winner of that title (at 46), which he won with great flair. In the final 10 holes, the old man recorded six birdies and an eagle.

Playing a limited number of events on the Senior PGA Tour, Nicklaus won 10 times (out of 32 tries) from 1990-95, twice winning the U.S. Senior Open.

In 1996, playing in his 40th consecutive U.S. Open -- itself a record -- on the monstrous Oakland Hills C.C. course, Nicklaus finished in a tie for 27th with the same score (287) that Hogan made to win the Open on the same layout. When he strode up the 18th fairway to conclude his play, Nicklaus was greeted with a thunderously warm ovation.

Nicklaus-designed golf courses are famous around the world. It is estimated that his company has more than 300 courses currently in play, which would make it responsible for an amazing 1 percent of all courses in existence.

Nicklaus has "officially" and unofficially been dubbed the greatest golfer in the history of the game. Based on his record, and with longevity a definite part of the equation, the designation can hardly be denied.

Who built the first miniature golf course?
How Golf Clubs Work
What is the history of golf?