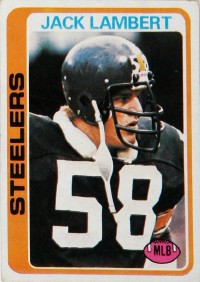 Jack Lambert played without his front teeth dental bridge, leaving a gap from eye tooth to eye tooth. The effect was to give him the appearance of having fangs. One commentator aptly combined his appearance and playing style in the description "Dracula in shoulder pads."

Lambert (born 1952) was a two-time all-conference defensive end at Kent State and a second-round draft selection of the Steelers in 1974.

The 6'4", 220-pound blond won the starting middle linebacker assignment in training camp as a rookie and kept the job throughout his 11-year tenure in Pittsburgh.

Even though he was the youngest starter on the Pittsburgh defensive unit, many felt that Lambert's presence was the final element needed to turn that unit into a juggernaut.

Lambert had all the necessary ingredients to close down opposing running backs-intelligence, intensity, speed, quickness, range, and durability.

He led the Steelers in tackles every year from 1974-83 with a technique that could be described euphemistically as enthusiastically aggressive.

Additionally, his height made him a formidable obstacle to passers when they tried to throw over the middle. He intercepted 28 passes in his career and also had 15 fumble recoveries.

Named the NFL Defensive Player of the Year in 1976, Jack was named All-Pro seven times in a nine-year span from 1975-83.

He played in nine straight Pro Bowls and was the AFC Defensive Player of the Year in 1976 and 1979. The Steelers' captain for eight years, he played in six AFC championship games and led his team to victory in four Super Bowls.

Lambert enjoyed an uncompromisingly macho image. When rules were passed to try to protect passers from being injured by sackers, it was Lambert who quipped that perhaps quarterbacks should start wearing dresses.

Ironically, the injury that ended his football career seemed wimpish to some fans-turf toe. But in truth, his 1984 toe injury made it impossible for him to move with any quickness or agility and was just as decimating as any knee injury.