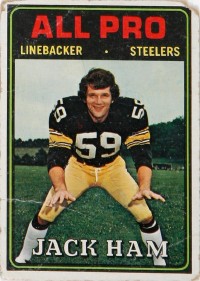 Jack Ham began his pro career with a misconception. He thought "you had to be bigger than life."

At 6'1" and 210 pounds when he reported to his first Pittsburgh Steelers training camp, Ham was definitely on the small side for a pro linebacker. "That's why I didn't know how long my career would be," he said.

It turned out to be 12 glory-filled years. Ham (born in nearby Johnstown in 1948) was named All-NFL from 1974-79 and picked for eight consecutive Pro Bowls.

The near-perfect outside linebacker for the Steelers four Super Bowl winners of the 1970s was chosen to the All-Pro squad of the 1970s by the Pro Football Hall of Fame. In 1988, he was enshrined in the Hall.

But back in 1971, Jack, a second-round draft choice out of Penn State, was a none-too-confident rookie. He won a starting slot in his final preseason game with three interceptions against the New York Giants. Throughout his career, the quiet, unassuming Ham showed a penchant for making big plays.

When he retired after the 1982 season, Jack had 32 pass interceptions and 19 opponents' fumbles recovered. A sure tackler and excellent pass defender, Ham had such a knack for blocking kicks that for much of his career he continued to play on the Steelers' special teams.

"He was superb," said Andy Russell, who was the other outside linebacker in Ham's early years. "I played the position for 14 years and watched film of every great linebacker you could mention.

"There was nobody better than Jack. People don't realize it, but in a five-yard dash Jack Ham was the fastest man in pro football. He had incredible acceleration that allowed him to come off a block, retain his balance, and explode. He'd make tackles look routine on plays where the rest of us would try to dive."

Penn State has had so many fine linebackers that it's sometimes called "Linebacker U," but Ham is the school's valedictorian.