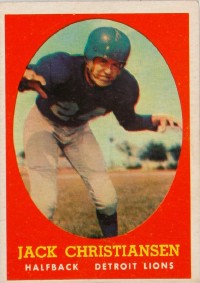 Jack Christiansen was the leader of defense. See more pictures of football players.

In a game against the Los Angeles Rams in 1951, Detroit Lions rookie Jack Christiansen ran back two punts for touchdowns. Later in the season, he did it again against Green Bay to prove it was no fluke.

No other NFL punt returner has ever had more than one two-touchdown game in a season. Nor has anyone ever topped the four TD returns he had for the '51 season or the eight he had for his career.

His 21.47 average yards per return for 1952 is the second highest ever, as is his 12.75 career average. A case can be made that Christiansen was the greatest punt returner ever.

That said, it can also be added that Christiansen (1928-1986) would have earned his 1970 election to the Pro Football Hall of Fame if he had never returned a single punt. His primary value to the Lions during his eight-year career (1951-58) was as a magnificent defensive back. "He was instrumental in the overall development of our defense," said Detroit coach Buddy Parker. "He ran it and he was the boss."

The Lions' defensive backfield during the period, known quite properly as "Chris’s Crew," was one of the most effective ever and contributed mightily to Detroit's three NFL championships and four division titles during Jack’s tenure. Christiansen personally contributed 46 interceptions, leading the league in 1953 and 1957.

Christiansen, who was raised in an orphanage, thought he had little chance in football when he entered Colorado A&M. Not only was he a mere 162 pounds, but also a shooting accident had weakened his left arm. As a freshman, he ran track. Coaxed out for football as a sophomore, he was the last player on the team's 44-man traveling squad until an injury to another player raised him to regular status as a standout two-way back.

The Lions drafted Christiansen on the sixth round in 1951 and assigned him to the defensive team. From there, he went on to be named All-Pro six times.