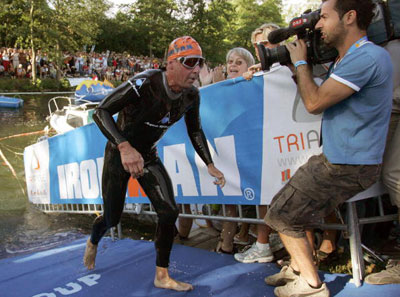 Each Ironman event begins with the swimming leg. At Kona, that's a 2.4-mile swim through Kailua-Kona Bay. The water temperature varies depending on the location of the event. It's actually better for the swimmers if the water is colder, because if it's below a certain temperature, the competitors can wear wetsuits. Wetsuits add buoyancy to a swimmer, which makes the swimming leg easier.

Ironmans with many entrants group the competitors to space out their start times. If they started everyone at once, it would be chaos, and people would probably drown. Even with the staggered start, the swim can be hazardous. A large number of swimmers make the water very choppy, and the close quarters lead to frequent unintentional kicks and elbows. Professional (also known as elite) triathletes usually go first, followed by the various age groups.

Upon completing the swim leg, competitors enter the transition area. This is where they switch from one leg to another. There's usually just one transition area, because the cycle course is a loop, but in events where the cycle leg isn't a loop, a separate bike-to-run transition area is required. The swim-to-bike transition is known as T1. Racers must find their bike in rows of racks with hundreds of other bikes, put on whatever clothes and footwear they need for the bike leg, walk their bike to the start of the bike course and start riding. At some point, they also need to put on a helmet, grab a water or sport drink and possibly eat an energy bar.

Both the biking and running legs take place on paved roads. However, some Ironman courses have more hills than others, so the terrain can be an obstacle.

The transition from bike to run (T2) isn't as difficult, but some triathletes experience leg cramps when they start running. Ironman races have support crews along the run leg that provide water, sports drinks and sometimes food. The only thing after the run leg is the finish line and the post-race party.

In distance bike races, many competitors engage in drafting, or following close behind another cyclist. Drafting helps the cyclist conserve energy by cutting down on wind resistance. In most Ironmans, drafting is not allowed. You can be disqualified for it, as apparent race winner Patricia Puntous was in 1986.

To qualify for the World Championship at Kona, you must place well in one of the other Ironmans held around the world. The number of qualifying spots up for grabs depends on the specific qualifying event. There are also 500 lottery spots given out at Kona to allow nonprofessional athletes to compete.

Sponsorships and donations allow race organizers to give out prize money. Winning an Ironman can be worth anywhere from $10,000 to $500,000.