History of the Ironman Competition 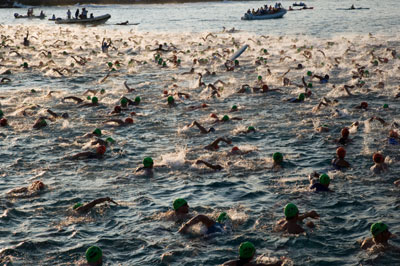 The start of an Ironman can be rather chaotic.
Alvis Upitis/Photographer's Choice/Getty Images

An Ironman race is actually a triathlon of a specific distance. While a triathlon is technically any event that combines three different sports, in the modern sense it refers to events that include a swimming, cycling and running portion. Triathlon was born in southern California in the mid-1970s. Several athletic clubs in San Diego participated in fairly informal events that included swims in Mission Bay. One of the participating athletes was a man named John Collins, an officer in the U.S. Navy. His deployments later took him to Hawaii, and it was there that the Ironman was born.

Hawaii was host to three endurance events: the Honolulu Marathon, the Waikiki Rough Water Swim and the Around-Oahu Bike Ride. Local athletes frequently engaged in good-natured arguments about whether runners or swimmers are the best, fittest athletes in the world. Collins suggested combining all three events into one incredibly difficult endurance race, the winner to be named "Ironman." At the end of the first race, in 1978, 12 Ironmen were born.

Media coverage by Sports Illustrated and ABC Wide World of Sports drew attention to the unique event. Within a few years, the number of people at the starting line had grown from dozens to hundreds to more than a thousand. In 1981, the race was moved to Kona, Hawaii, which actually made the Ironman even harder. The move placed the cycling leg through lava fields that are perpetually wracked by fierce winds. The combination of heat and wind can make cycling at Kona a brutal experience.

Triathlon gained in popularity. The United States Triathlon Association was formed in 1982, and triathlons of varying distances were organized throughout the United States. Officially sanctioned Ironman events quickly spread worldwide. However, the Ironman race at Kona remained the pinnacle of the sport, the true test of endurance. While each Ironman course has its own challenges, Kona holds a mystique for triathletes that no other event can match. Today, the Kona Ironman is the Ironman World Championship. Entries are limited to 1,700 people, earned by qualifying in another sanctioned Ironman or through a lottery system. It's sponsored by Ford and televised in hi-def. The Ironman races are owned and trademarked by an organization called USA Triathlon (USAT).

Triathlons have continued to grow in popularity as well. In 1994, the International Olympic Committee announced that triathlon would be added to the Olympics as a medal event. The first Olympic triathlon was held in 2000 in Sydney, Australia.

"Ironmen" is how triathletes refer to the group of people who have completed Ironman events, i.e. "When he completed the Ironman Canada in 13 hours, 42 minutes, he joined the ranks of the Ironmen."

"Ironmans" refers to multiple Ironman events, i.e. "She has entered four Ironmans and finished three of them."