On the Set of "Watchmen" 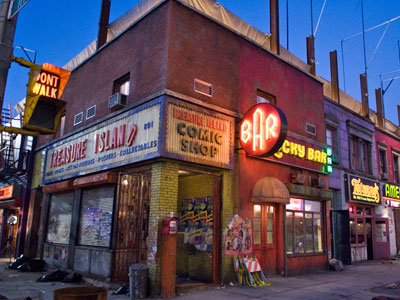 Part of the set of "Watchmen"
Photo courtesy of Warner Bros. Pictures/Clay Enos

­New York City was created on a three-acre lot at an old wood mill in Vancouver. Using the real city lacked the specific perspectives required and proved to be too costly, as did shooting on the Warner Bros. back lot. "Converting a lot of pre-existing sets was more expensive than building them from scratch," says production designer Alex McDowell.

McDowell's team built roads, sidewalks and multiple facades for the New York set that spanned three city blocks. "It had to play for all of our urban scenes from 1939 to 1985. We'd have one façade for a shot from 1950 with young Rorschach and then attach a front to it for a different scene," he says. Later, "We converted one piece of brownstone into Saigon."

Several Vancouver soundstages were used for interiors like Ozymandias' artic lair Karnak, a complicated set "because it was pretty much 360 degrees, had a big ceiling and had very few walls. There's no place to hide," explains McDowell. Breakaway walls and a staircase allowed for equipment movement on the stage, which was also used for Ozymandias' office and reception area and the Nixon war room. An adjacent stage housed several apartment interiors, the Owl Chamber and Dan Dreiberg's brownstone.

The Owl Ship itself had to work practically as an interior and exterior, and be sturdy enough to hang from cables. Its huge round eyes "made it tough to shoot without seeing the interior, so it made sense to create a single unit," explains McDowell. "But we were careful to build it in such a way that half the side could come off."

Theorizing that Dan Dreiberg would have assembled the ship secretly from aerospace or military parts, "we determined that it would fly like a Harrier jump jet with the structure of a submarine, but look as if it had been through the wars," with dents and scratches. The Owl Chamber was similarly distressed to reflect mishaps from imagined launch attempts early on.

­A paper factory was transformed for Dr. Manhattan's lab and apartment and the prison. "The floors were in place but we built everything else," notes McDowell. "Because of '300' I think people have this sense that Zack is all about CGI, blue screen and green screen, but it was very practical to shoot a lot of the film in camera. There was very specific blocking and it would have been impractical to go out and find a location. In the end, it was efficient. We could go from stage to stage and turn over sets on a daily basis."