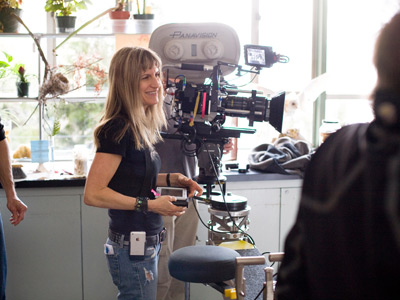 Director Catherine Hardwicke on the set of the thriller “Twilight.”
Photo courtesy of Deana Newcomb

On paper, Portland's winters were ideal -- cloudy most days out of the month. That proved t­o be true, for maybe 20 minutes at a time. Hardwicke would shoot a scene from one angle and set up another and it would rain, hail or the sun would come out, so she had to be prepared with a Plan B at all times. "Every single day, the call sheet would have at least three possible scenes that we could shoot every day. I had my shot list done two, sometimes three weeks if not a month in advance. I storyboarded the most complex scenes. We had the backup plan, and the backup plan to the backup plan."

Coupled with having to maneuver equipment, crew and actors into remote locations in the woods, the weather contributed to making the movie a logistical nightmare, says Hardwicke, who nevertheless met her schedule and budget. "We did not go over one day of shooting or post-production," she proudly points out.

­The cast found the unpredictable weather difficult as well. Taylor Lautner, who plays Jacob Black, still shivers at the memory of filming a scene with Kristen Stewart on a chilly beach. "It was the worst weather I'd ever been in trying to film a scene. For me that was the biggest challenge," he says. But the itchy long wig he had to wear wasn't a picnic either: The hair "was always getting in my mouth," he recalls.

Most of the "Twilight" actors underwent hair transformations. "If you had blond hair you dyed it brown. If you had brown hair you dyed it blond," observes Peter Facinelli, who fell into the latter category. "It took a good day at the salon, and with the touch-ups, it was high maintenance."

He and his fellow members of the Cullen family -- vampires all -- also had to wear pale makeup. "We had a week of testing of all different kinds of makeup," he recalls. "They had a gadget from Japan, an ionizer, and as they put the makeup on you, if they touched you, you'd get shocked. That would wake you up!"

The actors playing vampires also had to contend with special contact lenses that reduced their vision. "Ours were black with a hint of blood red," remembers Rachelle Lefevre, who plays villainous vamp Victoria. Wearing them, "You have no peripheral vision so you can't walk down steps by yourself. You trip a lot. I fully fell down once -- that was not slick. And I would always end up jumping out of my skin because you can't see anyone come up next to you."

Lefevre had a lot more fun with the film's stunt work, which included a wire rig called the Magic Carpet that creates the illusion that the actors are moving at faster than normal speed. "We did rehearsals in a warehouse. They started really slow, at five miles per hour and then eight miles, then 10, then 12, and they kept increasing the speeds. It was amazing, actually like learning to walk all over again, because first you started on your knees. Landing was really hard. You're supposed to stop in these sick poses, but they would stop and you would like propel forward," she relates. "But once you get it, it's a total rush."

­Not all her co-stars share her enthusiasm for wire work, particularly the harness aspect. "It was painful for me," relates Nikki Reed. "It's like a 15 pound girdle you're being strapped into and hooked onto cables. Then they lift you in the air and the camera's not ready so you're chilling in the air, dangling all of your weight. I just felt retarded."