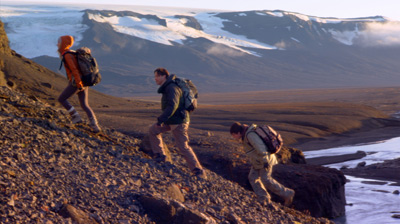 A couple of days in Iceland notwithstanding, "Journey" was mainly shot indoors on soundstages in Montreal, "so we were spared the weather issues," notes Brevig, who still had to work out how to build 40 sets on four stages, "knowing that we can't film and build on the same set at the same time. How do you change the lighting from an orange-lit desert to the blues and greens of the waterfall set without holding up the set builders below?" The solution? A pre-set lighting grid on a dimmer board that could be changed with the push of a button. "It probably saved us two weeks' production time."

Since big action set pieces are time-consuming to shoot, even with animatic blueprints as guidelines, Brevig "had two 3-D rigs so we would shoot two shots at a time, giving me more editorial coverage and a faster pace. I made a still frame grab of every shot and put them up on boards on the set in shooting order. We'd take them off one by one as we shot the sequences," he details.

His team had only one night to shoot an underwater sequence at the Olympic Stadium pool in Montreal, so "safety divers getting in the shot" were the least of his worries. But advance planning on the lighting end and not having to reload the digital camera allowed him to finish in seven hours.

Several physically demanding scenes involved suspending actors in midair in harnesses while they delivered dialogue. They were shot against a blue screen for part of the free-fall to the center of the earth, except for the portion where the camera is looking up at them. "We put the actors on their sides and we'd dolly past them with the camera on its side," Brevig explains.

He used a similar low-tech method for the waterfall scene, placing the stars on a 50-foot table covered in black plastic. "We went out in the parking lot at night, aimed fire hoses up the table and dragged the actors by wires on their feet. We put the camera on its side so it looks like it's vertical."

A scene underground: Is it real or computer generated?
Sebastian Raymond/New Line Cinema

Josh Hutcherson enjoyed doing "as much as they'd let me do" stunt-wise, including rock climbing and the sequence where he shoots into the air on a giant kite. He was spared injuries, but Fraser incurred several, including a burned hand from getting too close to an exploding magnesium flare.

"That was day three of shooting and we had to shut down for two days. Not that I wished it on him, but it allowed me 36 hours to go to Iceland and scout locations," notes Brevig, adding that Fraser hurt his back later on. "He was on a big rig and a got smacked in the tailbone. He took the brunt of the injuries, but everyone got scrapes and bruises from brushing against concrete and plaster."

Such SNAFUs aside, "Journey" came in well under its $70 million budget, according to Brevig, who'd happily direct a sequel -- mention of the search for the lost city of Atlantis was included precisely for that reason, he says. "I'd do it in a heartbeat," Hutcherson concurs.

­For more information on this movie, 3-D formats and related topics, journey over to the next page.