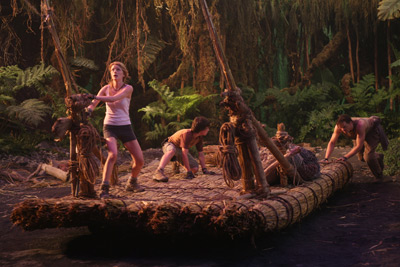 "The idea for a glowing bird had come up in one of the scripts prior to me coming on, and my idea was having these things swarm, to make it a magical moment," relates Eric Brevig. "There are shots where it looks like they're flying in the movie theater. Everybody reaches out and tries to grab one."

Computer-generated sequences like this were shot against a green screen, so the actors had to react to invisible objects that would be added later. "For the swarm shots I would just give them a place on the stage ceiling to look at, and for the close-up where the bird casts a glow onto Josh, we had a guy with a stick and a light bulb," says Brevig.

Similar methodology was utilized for the giant albino Tyrannosaurus Rex, carnivorous plant and razor-toothed flying fish that menaced the characters. For the latter, the actors "were responding to blue Nerf footballs," notes Ed Marsh.

Brevig provided artwork and animatics -- cartoon versions -- of all the action scenes to show the actors how the scene would play. Nevertheless, 15-year-old Josh Hutcherson, who had helpful experience working with green screen on "Bridge to Terabithia" and "Zathura," found it difficult to react to "a big, terrifying dinosaur when in reality it's a little pink dot. But Eric did a really good job of drawing it out for us and giving us an idea of what it was going to look like in the end."

The dinosaur posed different problems for the designers. "By choosing to have a bright white albino dinosaur they were making the 3-D harder for themselves. They had to play with skin tones and textures to make it believable because it could look like it's not finished yet," explains Marsh. "So they spent a lot of time adding dirt and scarring to make it look more real. Then there was the drool issue -- how far could we push it," he says of the T-Rex saliva, noting that Brevig didn't want to go too far over the top, but "the studio wanted a big 3-D moment" -- and it got it.

As for the giant Venus flytrap that terrorizes Trevor, approval for the sequence was granted at the last minute, "So planning fell by the wayside," reveals Marsh. "We didn't have time to check the shots. It was literally two camera teams working for 18 hours with Brendan Fraser pantomiming the whole thing, with the grand hopes that we'd be able to clean it up in post. We spent a very long time figuring out how the plant should look and move, and changing that motion.

To Brevig, the most technically complex sequence was the raft getaway, "because water is very complex and challenging to simulate. There's ocean and fish and sea serpents, all CG, all interacting with each other and the actors." And, adds Marsh, "in 3-D, you can't cheat. The foam coming off the top of waves had to be rendered like foam coming off the top of waves. It required a much tighter tracking of every element and its position."

We'll discuss other tricky action sequences in the next section.