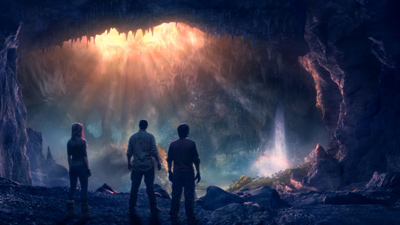 "The idea was to present the audience with things that they've never seen before. Using modern visual effects tools and computer graphics, I can create an environment that's pretty much seamless," begins Brevig. "As the adventure progresses, things get more and more fantastic-a much heightened reality-- and that's echoed in the photography, the lighting and the color palette of the movie" he outlines.

That intensity is heightened in 3-D; a process that involves filming images with two cameras simultaneously at a 90-degree angle using mirrors so that the viewer, wearing special glasses, sees a single three-dimensional image.

He assembled a team well versed in 3-D and digital HD filmmaking and tested all available systems before choosing the one pioneered by James Cameron and Vince Mason. " For 90 percent of the movie, we used a beam splitter camera. A beam splitter is a mirror that you can both see through and see reflections off of," he explains. "By mounting two cameras, or at least the lenses and the optical sensors from two cameras, onto this rig, you can adjust the lenses so they're different distances apart. For the big close-ups in the movie, I wanted the lenses to be very close together -- closer than the two lenses can fit. So by using this mirror rig, the lenses can appear to be 3/4 of an inch apart. This allows me to get big close-ups that don't hurt your eyes when you see the movie."

Most scenes were filmed in front of a green screen. The background was added later with a computer.
Sebastian Raymond/New Line Cinema

Brevig commissioned a compact version of the camera that mounted on a crane or a Steadicam, or used as a hand-held camera. "To my amazement, it worked from the first day through the end of photography. We had one hour of down time the entire production," he notes. But the 3-D format nevertheless presented other challenges after filming wrapped.

"Shots went through at least five or six iterations more than they would have for a regular film just to handle 3-D issues," comments Ed Marsh. "If you spend all day slaving over a tiny 24-inch monitor making the 3-D look perfect, don't be surprised when the image is projected onto a 40-foot theater screen and things aren't in the right place. You have actors embedding in the wall or you have those ducking objects that are way in front of them, or behind them. So you have to work big, early and often," by viewing footage on a large screen.

Because of limitations to the distance the eye can register 3-D, it's difficult to create an illusion of depth for objects more than 100 feet away. The filmmakers solved this by creating depth references, such as a rope in the climbing sequences, particles and bubbles in the water, and the flock of flying glow birds in the underground cavern that establish size and depth of the space. We'll give you the 411 on these and "Journey's" other CG creations in the next section.