Fact vs. Fiction in "Defiance" 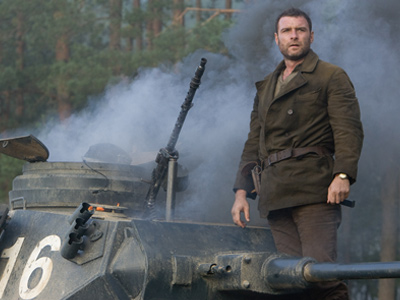 Liev Schreiber on the set of "Defiance."
Photo courtesy of Karen Ballard/Paramount Vantage

­For Zwick, no stranger to historical drama, it was essential that "Defiance" be true to the period in terms of scenic design, costumes, and props, including authentic weapons. "Our wardrobe designer Jenny Beavan found pieces in Poland that were the real thing, and then she'd make doubles and triples," the director notes. The bunkers, called zemylankas, were built according to actual plans, from hand-hewn logs. "That was really important to us, that the scale be real," he says.

But when it came to the script, dramatic license had to be taken to expedite and streamline the sprawling story. That meant "finding the signposts of the story" to include, explains Zwick. "They lost their wives, they found other wives. They were attacked by the Germans. They had to move from place to place. Tuvia ended up killing two members of his own Otriad. But they did more things than we could dramatize."

­"The events are pretty accurate to what happened over a four-year period and we condensed salient points so the story's told within a year," adds Craig. While the partisans are seen moving their camp only once, it actually happened several times. And although it appears that the brothers first met their wives in the forest, Zus and Asael knew the women before then. Lilka, in fact, was a teenager with a crush on Tuvia when he was married to her stepmother's sister Sonia, his second wife who was murdered by the Nazis.

Other liberties were taken with regard to the characterizations of the Bielskis themselves. Besides the three brothers focused on in "Defiance" and their youngest brother Aron, there were eight more Bielski siblings, some of whom were killed or had fled Europe earlier. The movie switches the birth order of Zus and Asael Bielski, the latter in actuality not as young as he is portrayed by Bell, the 22-year-old English actor known for his roles in "Billy Elliot," "King Kong" and "Flags of Our Fathers."

"In reality, he was 30 years old and formed the resistance. He was the first to bear arms, and then Tuvia took control. He was Tuvia's second in command," says Bell of Asael, who was drafted into the Russian Army and was killed seven months after leaving the forest. He never met the daughter he had with Haya, who later moved to Palestine. Tuvia, Zus, and their wives, and Aron, and the three brothers fought in the 1948 war of independence that created the state of Israel. They worked manual jobs there and eventually relocated to Brooklyn, New York, where Zus ran a trucking and taxi company and Tuvia drove a delivery truck. He died in 1987.

Aron, now in his 80s and known as Aron Bell, relocated to Florida and made headlines in 2007 for allegedly swindling an elderly neighbor out of $250,000. The case is pending.

Daniel Craig will be back as 007, eventually. "We started with 'Casino Royale' and tied up the loose ends in 'Quantum.' We can do whatever we want now," he says.

Edward Zwick, Alexa Davalos and Jamie Bell are considering or are attached to various projects in development. For Bell, one of those is "Defiance of Gravity," a drama starring Joan Allen.