Into the Woods for the Cast of "Defiance" 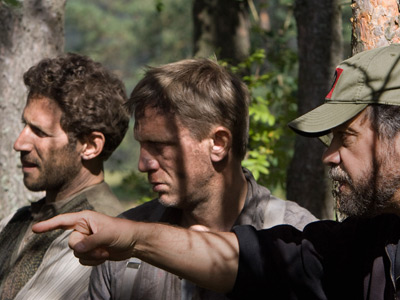 ­Lithuania was chosen as a stand-in for Belarus -- a dictatorship not hospitable to American moviemakers -- for financial, logistical and practical reasons. "The rivers and swamps are the same, the Eastern European faces are right. The forest is close to Vilnius, which could support a film crew," explains Zwick. Each day before dawn, the company drove to location, where September frost turned to deep snow by October and sunlight became increasingly scarce, requiring extra-fast lenses to ensure proper exposure.

"The forest was cold and wet, and the trailers were far away, so we didn't go back there for lunch. The food was bad and the portions were small, but everyone was forced to be together in this little community and that replicated the experience we were trying to dramatize," notes the director, convinced that this ironic synchronicity helped the movie.

­Nevertheless, he had to be prepared for contingencies. "We had to be very flexible. We built our little interiors on the set, so when it was pissing rain we'd move into the bunkers and shoot there." Sometimes the rain or snow wasn't heavy enough, "so we'd make more and add it to fill in."

"It was cold, but I felt like we had no right to complain. We got to go home at night," points out Davalos, who kept in mind that "at the end of the day, this is filmmaking. Death isn't around the corner all the time."

Reality did hit home, however, in the form of illness and injury. "We all got sick at times because we were in this cold, damp, horrible place, but nobody stopped working," notes Zwick. Liev Schreiber, who'd sprained his ankle while training for the movie, was afraid he wouldn't be able to walk. "I did physical therapy almost the entire movie," he says.

Navigating uneven terrain in period boots while running with weapons took its toll on him and others. "My back went out after a week," says Jamie Bell. George MacKay, who plays younger brother Aron Bielski, was injured before he got to the set. "He was in a traffic accident on the way to the airport in London and arrived with a gigantic shiner," reports Clayton Frohman. "It required a bit of rewriting to explain how he got that way."

Well-versed in weaponry thanks to the Bond movies and other roles, Daniel Craig was 'Defiance's" go-to gun guy. "There were weapons experts on the set, but when it came to guns I'd always watch Daniel," says Liev Schreiber. "Daniel was very helpful because obviously he's an expert with weapons," concurs Jamie Bell, who had some on-screen experience with guns in "King Kong."

"I was kind of familiar with bolt-action rifles, but the Russian submachine gun was a new toy," he says, noting that the unfamiliarity with it served the character well. "These guys weren't weapons-trained. They had no idea how to use guns. Of course, Ed wanted us to know how to use the weapons for safety, but it's right that the partisans look like they don't know what they're doing." In any case, he got used to toting a gun around. "Weapons meant power to these people," he points out. "They were like an extension of your arm."