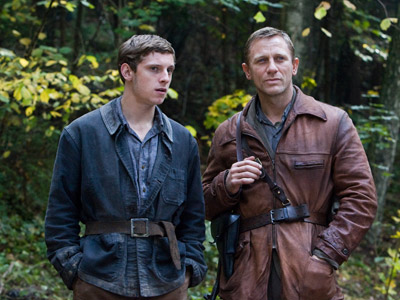 Jamie Bell and Daniel Craig on the set of "Defiance."
Photo courtesy of Karen Ballard/Paramount Vantage

­Before they were cast as Tuvia, Zus and Asael Bielski, actors Craig, Schreiber and Bell knew nothing of the history surrounding their partisan characters. Surprised and inspired by the story of survival under extreme circumstances, Craig was drawn to the role of Tuvia Bielski, the reluctant leader he describes as "a fascinating character full of contradictions and moral ambiguity." Tuvia and his brothers were far from white knights. In fact, they were brawling tough guys with a penchant for trouble and petty crime. "These were hard, uneducated men," notes Craig.

"The Nazis spoke the language of violence and terrorism, and these were people who understood and could reply," adds Schreiber, whose character Zus is a hotheaded loose cannon more motivated by retaliation and revenge than rescuing other Jews, which becomes a source of conflict between him and Tuvia,

Schreiber, who is Jewish and has acted in ("Jakob the Liar") and written/directed ("Everything is Illuminated") Holocaust-themed projects before, hesitated to accept the role but changed his mind after he read the Tec and Duffy books and Zwick convinced him. Required to speak Russian in several scenes, he hired a linguistics coach three months before the shoot. "I'm not conversational, but I can write and read in Cyrillic," he says.

Playing a real person was a responsibility Schreiber did not take lightly, especially when several Bielski children and grandchildren visited the set. "I was afraid initially that my characterization of Zus was something they wouldn't be proud of. I didn't want anyone looking over my shoulder saying 'Hey, that's not nice.' But when I spoke with them after, they loved it and said it meant a lot to them to see their father portrayed that way."

Alexa Davalos found it similarly daunting to play Lilka, who becomes Tuvia's wife. "Her grandchildren will see this," she acknowledges. "'The goal was to do her justice." While unaware of the story beforehand, Davalos felt an instant connection to it, especially after arriving on location. "My father is Jewish and I have great-great-grandparents who were from Lithuania," she explains. "To be there and realize my family had been there and escaped" before the war, "It was a really moving experience for me to be part of telling this story."

According to Zwick, several elderly members of the surviving Jewish community in Lithuania appear as extras in the film alongside professional Lithuanian actors. "A theater director who was bi-lingual became a liaison for me," he notes.

The production spent three months in the fall and early winter of 2007 in the forest about an hour's drive from Vilnius, the Lithuanian capital that served as the company's home base, and the experience gave the cast and crew a very real idea of the conditions endured by the partisans.