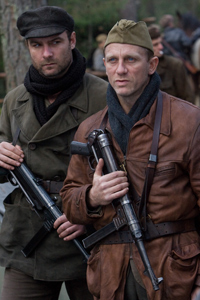 ­"Defiance" is not your typical Holocaust movie, and not just because the reigning James Bond plays the hero. It's the fact-based story of the Bielski brothers, who organized a Jewish partisan unit in the Belorussian forests to fight the Germans and their collaborators during World War II and rescue their fellow Jews. By war's end, they had saved 1,200 people from certain death.

"Defiance" departs from Hollywood dramatizations such as "The Diary of Anne Frank," "Schindler's List" and "The Pianist," which portrays Jews as unwitting victims doomed to a horrible fate in Hitler's gas chambers. If they survived, it was only by luck, circumstance or the intervention of gentile saviors like Oskar Schindler. Anyone who fought back, including the Jews behind the Warsaw Ghetto rebellion dramatized in the 2001 TV movie "Uprising" or the Auschwitz prisoner revolt depicted in "The Grey Zone," did so valiantly but in vain. "Defiance," according to director Edward Zwick, underscores that there really were Jewish partisans, "something for the world to look at now and say, 'It did happen.'"

The story did not, however, have an easy road to the screen. Zwick ("Blood Diamond," "Glory," "The Last Samurai") and his writing partner Clayton Frohman became aware of the Bielski brothers' history in 1995, when they read the obituary of Zus Bielski, played by Liev Schreiber in the film. That led them to read Nechama Tec's book "Defiance" and do extensive research in the archives at the Shoah Foundation, Simon Wiesenthal Foundation and the Jewish Partisan Education Foundation.

­Condensing the event-filled saga of the partisans' th­ree years in the forest into a coherent screenplay was a challenge that required numerous drafts. Several studios became attached and unattached, and the project lost steam. "We went off to do other things," notes Zwick, who spent two years each on "The Last Samurai" and "Blood Diamond." "But we periodically went back to it."

Then, on a ski vacation in Colorado, Zwick was alo­ne in the snow at dusk when a binding on his boot broke. "I thought, 'I'm in the middle of nowhere. How would I survive?' It rekindled this appetite for the story, and we rededicated ourselves to it at that moment."

­Shot independently with European financing, the Paramount Vantage-distributed movie was made for roughly $30 million. "We all had to take a quarter of our usual salaries," says Zwick The pay cut didn't deter Cr­aig, Schreiber, Jamie Bell or the other actors from signing on, nor did the daunting prospect of playing real people or shooting in winter in the wilds of Lithuania, as we'll detail in the following sections.