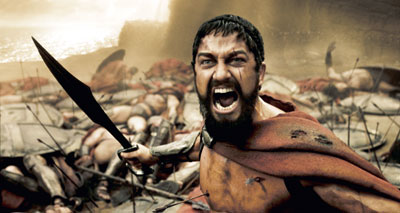 “You have to get 50 guys who don’t know each other to work together including guys who never touched a sword in their lives,” Stahelski begins. “To get them all to the quality level that the director is looking for and make it all work—it all goes back to preparation and training.” He, Caro, and 10 stuntmen they brought from Los Angeles, supplemented by 35 to 40 from Montreal, formed the battle corps.

“These are supposed to be the elite 300 Spartans,” Caro reminds. “What are you gonna do, get six great Spartans and a bunch of extras that can’t pick up a sword? We made it look like there are 300 real Spartans there.”

Gerard Butler and David Wenham came into "300" with a bit of sword-handling experience, “but we changed everything so they had to start from scratch,” notes Caro, who’d previously worked with Snyder on Dawn of the Dead. He and Stahelski based their choreography on research and experience with fighting styles and weaponry.

“It’s well known that they fought as a unit, and we implemented the tactics that they used. There are no historical records, but we understand what they might have done in combat,” Caro explains. “We didn’t just throw a bunch of moves together. There is a method to the madness,” adds Stahelski. “We took a little liberty to make it cinematically attractive. But there’s military strategic detail built into it.”

Friends for nearly 20 years who met at a martial arts gym in Los Angeles, the pair—with third partner Dave Leitch, a frequent stunt double for Matt Damon and Brad Pitt—now run 87eleven, a stunts/fight/action training facility where they train actors and stuntmen on gymnastic, acrobatic and cross-training apparatuses of all kinds. Butler worked out there prior to filming, as did the stunt crew, and continued for five weeks prior to the shoot in Montreal.

“At 9 a.m. we’d do two solid hours of martial arts and sword work with the stunt people and the actors would come in for another two to four hours, and after lunch the actors would work with Mark Twight,” outlines Stahelski. “It was a full eight-hour day.”

The results are apparent on screen, which Stahelski attributes to the performers’ commitment at the gym and discipline at the table. “They got in great shape. They’d have a cheat meal maybe once a month, but they were so good,” he says. “No one really cheated until the wrap party.”

With the buzz on "300" ringing loudly in Hollywood before its release, producer Mark Canton expects others to jump on the bandwagon, “asking how they can make movies like "300" practical and audacious at the same time.” Chris Watts has already fielded calls along those lines, a proposition that scares him. “People will want to make movies in the style of '300' but for less money and in half the time. I don’t think I’d jump on it just because it was going to be made like this,” he says, although he’d gladly work with Snyder again.

For lots more information on "300" and other related topics, check out the links below.

What's Next for the Cast & Crew

Zack Snyder will shoot "Watchmen," another graphic novel-to-film, this summer. “There might be a role for Gerry in the movie,” he says of Butler, who’ll next star in the thriller "Butterfly on a Wheel" and the romantic dramedy "P.S. I Love You" with Hilary Swank.

Caro and Stahelski would also work with Snyder again in a heartbeat; meanwhile, they have several films awaiting release. Both did stunts in "Next" and "Live Free or Die Hard," while Caro also did them on "Spider-Man 3" and choreographed fights for "The Bourne Ultimatum." Stahelski choreographed martial arts in "Balls of Fury."

Rodrigo Santoro, currently enjoying life in Hawaii where he surfs and does yoga every morning before work on "Lost," is dividing his time between America and his native Brazil, where he has two films in the can, "Not by Chance" and the bossa nova-themed "Out of Tune," with "Party Crashers" up next.