The Blue Screen and Visual Effects 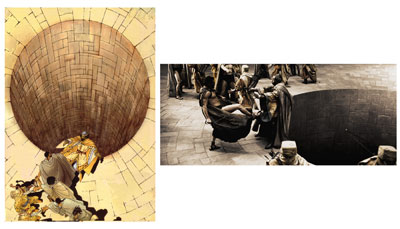 One the left, a panel from Frank Miller's graphic novel "300." On the right, the corresponding scene as it appears in the finished film.
Photo courtesy of Warner Bros. Pictures

Heading north of the border to save money on production costs and take advantage of good crews and proximity to the visual effects house Hybrid, the movie was “shot it in Montreal, which I know instantaneously brings to mind ancient Greece for a lot of people, with the harsh winters and French and all that,” quips Snyder, noting that his 61-day shoot finished on schedule in January 2006.

With a couple of minor exceptions, the entire film was shot indoors, against a blue screen. Cinematographer Larry Fong devised an efficient method combining overhead and key lighting that made for faster, more efficient shooting — it allowed the perspective to change by turning the simply reversing the lighting: all lights were pre-mounted, so it was a matter of flipping a switch and then some tweaks. Because all the backgrounds were added later, neither the camera nor the actors had to move. This disoriented actors, “because they didn’t know where they were half the time, but because it was so physical, they eventually forgot about the blue screen,” notes Snyder.

Chris Watts, the Visual Effect Supervisor over a department of 17, and another 500 artists working in graphics facilities around the world, faced the challenge of creating a three-dimensional version of Miller’s world and adding elements that weren’t in his novel that would remain true to it. “They say that art is never finished, it’s expanded, and there’s definitely a huge element of that in this movie. I’ve done a lot of movies with a lot of shots and a lot of movies with difficult shots but had never done a movie with twice as many shots that were difficult,” states Watts, whose credits include Gattaca, Waterworld, The Day After Tomorrow, Harry Potter and the Prisoner of Azkaban, Corpse Bride, The Fog and Pleasantville.

Watts, one of the first hired on the film and the last to leave when post-production was completed in January 2007, dealt with the logistics of 1300 effects shots and the limitations of shooting an epic on a soundstage. “In the battle scenes, if you wanted to have someone walking from far away right up to the camera, you couldn’t actually put them far enough away—there wasn’t enough stage space for the amount of time they’d be walking to cover the necessary distance,” Watts explains. “So we’d shoot elements and delay them in time and filled up the back space with CG people. We had hundreds of shots of digital people and even more with real people composited in, because we couldn’t afford digital people in every shot. You try to do things as efficiently as possible because there’s always something that comes up that you’re not expecting and you don’t want to have to say no to a director.”

“On "Pleasantville," we had one terabyte of disc space for the whole thing. Now I have 16 terabytes on my desktop. We’re an all-Mac department and I have 15 G5s. Most of the compositing is done on Shake or Inferno,” says Watts, who needed that capacity to handle elements like fake water. “I shot a little bit of ocean off the Santa Monica Pier and we used that for two shots but most of it was digital water.” A German company, Scanline, digitally created all the elements of a scene showing Persian boats crashing against rocks. For another scene, depicting a burning village, “We shot one burning building from a lot of angles and smoke and put that together in an amazing sequence.”

The view that greets the Spartans and their allies as they reach the Hot Gates is the vast Persian fleet approaching the Greek coast.
Photo courtesy of Warner Bros. Pictures

Scenes involving horses were particularly complicated. “In the first battle scene,” Watts relates, “we had the riders ride the horses up to the edge of the blue screen and skid to a stop. That was a challenge we got around through clever editing and a convincing backdrop.” But the Persian messenger‘s ride over the hill to Sparta actually had to be shot outdoors. “We couldn’t get the horses running fast enough [otherwise],” says Snyder. He was intent on having a real feel to "300" despite the artificial setting. “I didn’t want the movie to look like it was made in a computer, like 'Polar Express.' The movie was shot on film. We added grain and lens flares because I wanted it to feel rough. It’s very organic-feeling.”

The Messenger (Peter Mensah), brandishing the skulls of kings who dared to stand against the might of the Persian empire, arrives in Sparta to deliver Xerxes' message.
Photo courtesy of Warner Bros. Pictures

With spurting showers of blood and no less than three decapitations, 300 earned an R rating for its stylized violence, described by producer Deborah Snyder, the director’s wife, as a “ballet of death.”

But according to Watts, “ We shot with very little actual blood because we had a limited production schedule and shooting with blood can really multiply your shooting time by a lot, and we didn’t want to have a lot of photorealistic blood in the movie—it would have gotten us an NC-17. So [Grant Freckleton, the VFX art director] designed what we call 2-D blood: we splattered coffee onto napkins, photographed it and did some digital processes on it. We shot a lot of blood as elements against blue screen to comp in but we used very little of it because at the end of the day the 2-D blood looked a lot more like the comic book and we could use a lot more of it without agitating the ratings board. The makeup people kept asking me when we were going to use blood. They had gallons of fake blood but we never used it.”

On set, Watts coordinated with the set design and costume departments to prevent problems. Costume designer Michael Wilkinson “showed me one particular fabric that was beautiful but when you bent it, it developed this blue sheen on the edges so we got rid of it. It wouldn’t have worked against the blue screen.”

Blue screen, rather than green, was chosen for several reasons. “We have a lot of red in the movie, and sometimes when you have saturated red on a green screen you often have edge problems, where you get a yellow edge. It has to do with the way light travels through film and interacts with the emulsion layers,” explains Watts. “Also, the amount of light that bounces back off a blue screen vs. a green screen is different. The green bounces back a little more light, and we would have ended up with screens that were a little brighter than I like to shoot them. Some say that the color of the spills that come off a blue screen are less objectionable than those that come off a green screen.”

Whatever the background color, it took some getting used to for the actors. “You need every bit of your brain that you can use to imagine because there’s nothing around, just blue walls. You have to imagine with full concentration,” offers Santoro.

We'll look at the task of costuming the heroes as well as the original myth of the Spartans in the next section.