The MIT Blackjack Team on the Big Screen 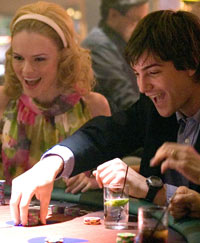 In "21," when MIT student Ben Campbell (Jim Sturgess) joins the blackjack team and takes Vegas for millions, he finds himself seduced by the money, the lifestyle and his smart and sexy teammate, Jill Taylor (Kate Bosworth).
Peter Iovino © 2008 Columbia Pictures Industries, Inc. and GH Three LLC All Rights Reserved

"I was fascinated by the story, the idea of taking Vegas for millions," says director Robert Luketic, who'd read an excerpt of Ben Mezrich's "Bringing Down the House" in Wired magazine. He was crushed when he found out the rights had been already snapped up by Kevin Spacey and his producing partner, Dana Brunetti. "I threw the magazine across the room and pouted for about two weeks," the Australian director admits.

He forgot about the idea until his agent sent him Peter Steinfeld and Allan Loeb's script for "21." "It's funny how things come full circle," Luketic says, noting that the script came to him at a time when he was eager to break out of the romantic comedy pigeonhole he'd landed in after directing "Legally Blonde," "Win a Date with Tad Hamilton," and "Monster-in-Law." (The writers had added a romantic element to the story, but it isn't a focal point of the movie.)

Jeff Ma, Mezrich's main source for "Bringing Down the House," was also an invaluable source of information for Luketic. "At the first dinner we had, he told all kinds of incredible stories and scenarios and situations," Luketic says. "It humanized the story and took it to a whole new level."

Mezrich's book provided inspiration, but Luketic thought it needed some alterations. "We focused it on one particular character's journey and changed some of the names and places for legal reasons," he says. "But we were authentic in terms of the way the team worked and the system they used."

Luketic and the writers took other minor liberties with the story, including:

According to Luketic, hundreds of actors auditioned for the Ben Campbell role, but Englishman Jim Sturgess had the perfect blend of innocence, accessibility and bad-boy charm. Impressed by what he saw at a preview screening of "Across the Universe," the director had Sturgess make a test tape using an American accent.­

Luketic directed Kate Bosworth in "Win a Date with Tad Hamilton," and Kevin Spacey had worked with her in "Superman Returns" and "Beyond the Sea," so when her name came up it was a matter of a phone call. "She's not shy to experiment, and I'm not shy to ask her to try things," says Luketic. "We have a great time."

Luketic recalls being initially intimidated by Kevin Spacey, but he was immediately put at ease upon meeting his star and co-producer: "He was the guy we could always call to get things done. He's great at persuading people."