Browse the article Inside 'I Am Legend' 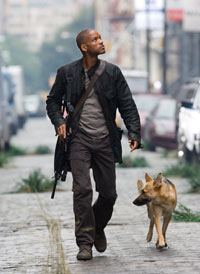 Imagine the bustling chaos of New York City suddenly quiet, still and devoid of life -- save for a solitary man and his canine companion, walking down a desolate, overgrown Fifth Avenue. That unsettling vision sets the scene for the postapocalyptic future of "I Am Legend," in which a mutated virus originally developed to cure cancer has wiped out the planet. Dr. Robert Neville (Will Smith) is the last man standing, a virologist who searches for a cure by day and barricades himself against roving bands of infected, bloodthirsty zombies by night.

"I Am Legend" is based on a 1954 novel of the same name by Richard Matheson. It was adapted in 1964 as "The Last Man Standing" with Vincent Price and again in 1971 as "The Omega Man," starring Charlton Heston. This latest incarnation was a monumental logistical and technical challenge for the filmmakers and a psychological one for Smith, who single-handedly carries the film.

In this article, we'll outline the process of bringing this $150 million-plus movie to the screen and hear firsthand from Smith, director Francis Lawrence and co-screenwriter Akiva Goldsman.

The third remake of "I Am Legend" hit many roadblocks on the way to the multiplex. Arnold Schwarzenegger and Ridley Scott were about to shoot it in 1997 when Warner Bros. balked at the $108 million budg­et. Tom Cruise, Michael Douglas and directors James Cameron and Guillermo del Toro were variously interested or attached, and Will Smith and Michael Bay nearly made an R-rated version in 2002, but the similarly themed "28 Days Later" stole that thunder.

Three years later, Akiva Goldsman and Francis Lawrence, who worked together on "Constantine," revisited the idea as character-driven, PG-rated survival story and got a green light from Warner Bros. Once Smith came aboard, they refined the concept, incorporating some elements from previous screenwriter Mark Protosevich.

"That started in February 2005, and we started officially prepping in May 2006," says director Francis Lawrence. "We shot from September till the beginning of April. We were under-budget in production and we finished a couple days early." That seems almost miraculous in terms of what was required to make it happen. Next, we'll learn about the enormous undertaking of shooting on the "deserted" streets of Manhattan­.

The bridge-destruction scenes are some of the few completely computer-generated shots in the movie.
Barry Wetcher, SMPSP

Matheson's novella is set in Los Angeles, but the movie takes place in New York City, which Lawrence thought made a more strikingly empty location. He estimates that there are about 830 special-effects shots in the film, but he didn't want to rely completely on computer imaging to achieve the ghost-town effect. "I didn't want the city to look like a painting," he says. "When you shoot on blue screen and green screen all the time and everything is generated, it starts to look a little painterly."

So Lawrence set about filming on the streets of Manhattan. As you might imagine, this roused the ire -- and raised the middle fingers -- of some inconvenienced Manhattanites. But for Will Smith, that was a small price to pay. "You just can't beat actually walking down the center of a New York street with an M-16," he says. "It really assists in the psychology of creating the character when you can actually be in the place and not on green screen or in Baltimore [standing in] for New York."

The effects team did have to do some postproduction work to remove signs of life from the landscape, but, Lawrence says, "at the core you have a real place with real light and particles in the air, and it adds realism."

Lawrence cleared out an area outside Grand Central Station, Fifth Avenue and Washington Square Park for a driving sequence. "The movie couldn't have been more fun or more of a headache at the same time," he says. "You have 200 production assistants hiding in doorways and around corners, and traffic cops blocking the street and it's a zoo, just to get a shot of a guy walking down the street with his dog." The destruction of bridges and Times Square, of course, were computer-generated -- the only exterior shots that weren't live.

Other than the occasional uncooperative individual, Lawrence says, people accommodated the production -- and the elements obliged, too. "We got really lucky, weather-wise," he continues. "We had to shoot all the exteriors while there were leaves on the trees, and a lot of it we had to shoot weekends for traffic control. It was really precisely scheduled out. Had we been rained out it we would have been screwed. But it only rained twice when we were shooting outside."

Lawrence says he couldn't have made the movie without the cooperation of numerous city and government agencies, especially for a chaotic evacuation sequence. He spent five days directing Smith and 1,500 extras on a pier built on a barge under the Brooklyn Bridge.

"It was a daunting idea to take that on," Lawrence admits. "That was a lot of cooperation from a lot of people -- the Coast Guard, the National Guard, the city, the police, the fire department. But the evacuation actually went pretty smoothly," he says.

Smith worked with his son Jaden in "The Pursuit of Happyness" and now co-stars with his 7-year-old daughter, Willow, in "I Am Legend." Smith admits to a bit of sibling competition on Willow's part. "She just wants it, she has a drive, an energy, and she just connects to human emotion," says Smith. "She saw what Jaden did and she thought, 'I want that.'"

The Smith children see showbiz differently, their dad reports: "Jaden is Johnny Depp. He just wants to do good work. He doesn't care what money he gets. He doesn't care if people see it or don't see it … Willow is Paris Hilton. Willow wants to be on TV."

Lawrence says there was one filming snafu that was saved by Smith's positive attitude. "It was about 1 o'clock in the morning at the end of January and about 7 degrees, so everyone was freezing, and we were about to roll when the camera jammed. So Will grabbed the assistant director's mike and started singing his song 'Summertime' to the entire cast and crew, and everybody started singing along. That's the kind of guy he is. It was really special."

Other tricky sequences were shot early in the process, including an aerial view of Smith hitting golf balls off an aircraft carrier and an opening sequence of Smith navigating the streets of the city. "It was a race to get all that exterior work done before the leaves were gone," says Lawrence. He had to spruce up the vegetation with real flora and CG work by Sony Imageworks, which also added computer-animated deer, fire effects and the rabid zombies. The zombies' movements were created on camera by actors in sensor-covered blue spandex motion-capture suits.

Lawrence used armories in Brooklyn and the Bronx for some sequences -- the latter for Times Square and the former for the four-story brownstone housing Neville's fortified apartment and lab. Art aficionados will recognize famous paintings like Van Gogh's "The Starry Night" on the walls -- Neville takes them from museums. "They're not prints. They're actual paintings," says Lawrence. "Some of them already existed, and some we had done; there are artists that specialize in that."

A replica of the Brooklyn pier was recreated on the soundstage for other scenes requiring green screen, such as one where Neville fights zombies, using his vehicle as a weapon. Smith did a good amount of the stunt work, Lawrence notes: "It's always better if you can put the actor in and you can see that it's him."

Only a small portion of the footage shot ended up on screen. "We shot for a really long time, as is typical of a movie like this," comments Akiva Goldsman, also a producer on the film. "This kind of filmmaking is definitely more fluid because it's determined by what you end up rendering in terms of visual effects. You don't really have it until well into the editing process."

While he'd never done a huge effects movie before, Lawrence found that his background in directing commercials and videos for the likes of Jennifer Lopez, Justin Timberlake, Aerosmith and Gwen Stefani served him well. "Having had the opportunity to play with all the things that are out there and try different things and work in all kinds of environments helps make being on set, changing directions, being able to do different things spontaneously be second nature," he says. "It makes it easier for me to express what I want to express on camera." 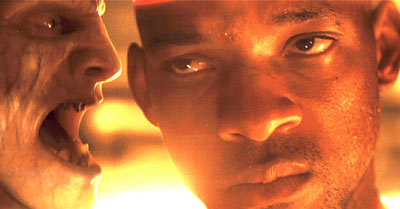 Will Smith with a CG zombie in "I Am Legend"
Photo courtesy of Warner Bros. Pictures

Of course, months of preparation went into the movie before a single frame was shot. "Will and I … went to the CDC and to the University of San Francisco and met some virus hunters to see what it's like to be a virologist and how they think," says Lawrence, who first met Smith when he directed the actor-rapper's "Black Suits Coming" video for "Men in Black II."

Other expert sources, like a psychiatrist who deals with people in isolation and solitary confinement, helped them understand the psychology of a solitary existence. Smith and Goldsman also interviewed an ex-prisoner who'd spent time in solitary. "The one thing that was across the board was schedule," Smith says. "He would schedule things like cleaning [his] nails. That was the only way to maintain sanity."

Working out was part of Neville's regimen, and thus Smith's. He lost 20 pounds and gained a six-pack by running five miles a day, six days a week. "What we determined from our research is that eating becomes just something that you do just because you have to," he says. "There's no pleasure, there's no real desire to eat. You just know that your brain won't function if you don't."

Smith's onscreen internal monologues -- sometimes in the form of having a conversation with himself, his dog or a mannequin -- were more of a challenge. "It's a weird thing you have to do, but when you see it, it looks like there's a lot going on even though it's a dude sitting there with a dog," Smith says.

"There aren't many actors that can pull off a one-man show," says Lawrence. "Part of it is just his charisma. Part of it is he's a really good actor. He's very precise with his choices, which is very important for this movie because there's so little dialogue."

Smith relished the challenge, but can't imagine actually living in Neville's shoes. "As much as people get on your nerves on the freeway," he says, "as much as people irritate you in your daily life, if you took everyone away, it would be the most miserable existence that you could experience. There was absolutely no pleasure for me at all in experiencing that amount of loneliness and solitude."

But without giving too much away, in the end there is a ray of light to redeem the darkness. "It's a movie about hope and the struggle to find hope in the face of so much loss," Lawrence says. "It's a very simple, human idea."

To learn more about "I Am Legend" and movie special effects, check out the links on the next page.­­

Directors often dread working with animals, but Lawrence was relieved to find that Abbey, the 2-year-old German shepherd that played Neville's companion Samantha, was a pro even though she'd never acted before. He recalls only one day that a backup had to fill in when Abbey didn't want to play fetch. "She was a rescue; she wasn't even a movie dog," he says. "The trainer only had a couple of months to work with her. But she was a great dog. She would do what we wanted her to do and her reactions were completely natural. She rarely gave us any problems."