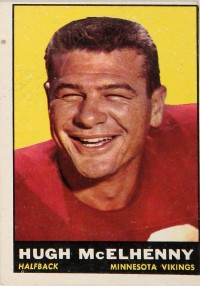 Hugh McElhenny was the Elvis  Presley of football -- his  electrifying moves left his  opponents in a daze. See more pictures of football players.

Hugh McElhenny was to pro football in the 1950s and early 1960s what Elvis Presley was to rock and roll.

Known as "The King" (McElhenny that is), he had it all. He was an artist whose electrifying moves left opponents and observers spellbound.

The University of Washington All-American halfback established conference records for yards gained (2,499) and longest punt return (100 yards) and led the conference in scoring in 1950 and 1951.

A first-round draft choice of the San Francisco 49ers, McElhenny was an instant hit. His rookie season left sportswriters groping for new superlatives.

The versatile back recorded the season's longest run from scrimmage (89 yards), the longest punt return (94 yards), and the top rushing average (7.0 yards per carry).

Not surprisingly, he was a unanimous choice for the league's Rookie of the Year honors.

Considered the greatest "thrill runner" of his day, McElhenny ran with a tremendously long stride and high knee action. His breakaway speed and unique ability to change direction at will left defenders dazed and confused.

In 1961, after nine seasons and five Pro Bowl appearances, McElhenny was pawned off to the expansion Minnesota Vikings. It was, all things considered, his finest season. With the Vikings, he accounted for 1,067 combined yards and made his sixth trip to the Pro Bowl.

Two years later, as a member of the New York Giants, McElhenny realized a dream that had thus far escaped him -- playing on a championship team.

Although Hugh's knees were already shot, Giants coach Allie Sherman knew he would give the team "his very best," something he did automatically his entire 13-year career. When he retired after the 1964 season, McElhenny was one of only three players to have gained more than 11,000 all-purpose yards.