Prev NEXT
Knowing when to knock is the key to winning Knock Rummy, another member of this card-game family. Here's how to play:

Object: To knock and stop play when your count of deadwood or unmatched cards is less than your opponents'.

Playing: Knock Rummy plays like Gin Rummy, except that players do not have to gin to stop play. A player can knock (rap on the table or say knock). Unlike Gin Rummy, the knocker's deadwood does not have to be less than 10 points. A player knocks after drawing the top card from the stock or the top card from the discard pile and before discarding. The knocker then discards and all players show their cards, separating melds and unmatched cards. Cards are not laid off.

If you knock and an opponent has the same amount of deadwood points, that opponent collects the point difference from the other players. If more than one opponent ties your deadwood score, they split the difference.

Tips: With two players, if you're dealt a deadwood count in the 40s, that may often be lower than your opponent's count. Since losing costs an additional 10-point penalty, however, you should probably make a quick knock only if under 35.
With more players, the added bonus for going rummy may influence you to play out a hand with an early meld. That's OK if your deadwood cards are relatively high (7s and above) or if your unmelded cards have a good chance of making a meld. But if your deadwood count is low, you should end the round as early as possible -- before your opponents draw enough lucky cards to win.

The next section will review the basics of 500 Rum, a wild version of Rummy. 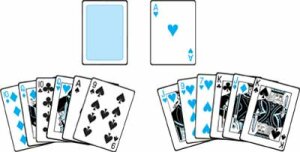