Browse the article How to Play Leopard 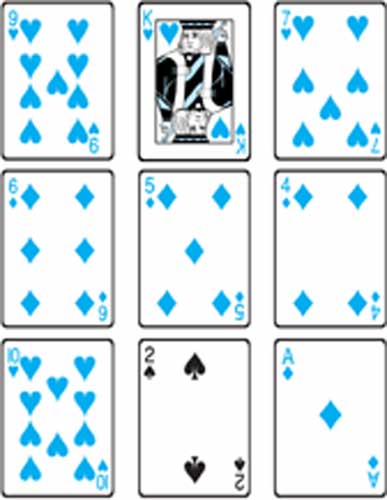 The grid in the diagram is worth 8 points before bonus: It has two single-suit lines, worth 4, plus four lines of mixed suits of the same color, worth 4 more points. With bonus, the score for the hand is 11.
©2006 Publications International, Ltd.

Leopard is an unusual and challenging card game of changing spots. Try to line up the "spots", or suits, in this advanced tic-tac-toe variation. Here's how to play:

Object: To score cards in lines of three of the same color.

To play: Deal eight cards to each player. Place the rest of the cards in a draw pile, with room for a discard pile next to it.

Leave enough play area between players for each to lay out a three-by-three grid like the one in the diagram below.

Starting with nondealer, take one card from the draw pile, and then play one card onto either your grid, your opponent's grid, or the discard pile.

If no one goes out and you exhaust the stock, play on with the cards you have left. If all cards are played and still no one has gone out, players score whatever value their squares have.

Scoring: A grid line with three cards of all the same suit scores 2 points. A line with cards of all the same color, but mixed suits, scores 1 point. Verticals, horizontals, and diagonals all count, so there are eight lines in all. Your grid can score both red-suited lines and black-suited lines, but the more cards of one color you have in your grid, the higher your score is likely to be. If no one goes out, for every point over 5 that your square is worth, score one additional point. The penalty for going out is 1 point; subtract it from the value of the grid.

Tips: Because you can play jacks anywhere to interfere with your opponent's plans, they are very valuable cards. If possible, save them for important occasions. For example, they are the only cards you can play on an opponent's king. When playing a jack onto opponent's grid, pick a spot where there may be a weakness.

Variation: Running Leopard is played by drawing two cards at a time instead of one. You must still at least discard one card, but if you play on the grids, you may play as many cards as you like as long as each is legal. Score as in regular Leopard.

Stock: The undealt cards available for future use