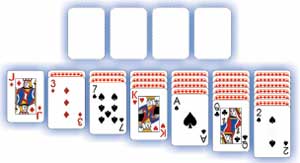 ©2006 Publications International, Ltd. At the beginning of play, place the then both of those cards on top of the one of the foundation blanks above, and the of the empty column, and turn over the four top downcard.

For many people Klondike is synonymous with solitaire. Why it has been such a popular card game is a puzzle, since you don't end up a winner very often. Here's how to play:

Object: To uncover the four aces, to create foundations for each suit by starting with aces, and to build the foundation of each suit from the ace to the king sequentially.

Dealing to the tableau: To build the tableau, moving from left to right, deal a row of seven cards. The first card is dealt faceup, the rest facedown. Next, place a card on the six downcards, with the first card turned faceup. Repeat this dealing pattern until you have made seven columns (or piles) of cards ranging in count from a single card on the farthest left to seven cards on the farthest right. The top card in each column will be faceup. You can leave a slight portion of the top of each card exposed (this will indicate how many cards are still in the pile), or you can square up each column into piles (this increases the difficulty of the game). The rest of the cards form your stock, which you can keep in your hand or place on the table by the tableau.

You can build descending sequences on the cards of the tableau. Tableau sequences must be built in alternating colors, for example a 8 has to be played on a 9 or 9. You may take cards from the stock or the tableau and place them on the foundation.

Playing: Turn over one card at a time from the stock. This card may be used in either the tableau or the foundation. If there is no place to play the card, place it faceup in a pile immediately to the right of the stock. You will develop two stock piles -- one facedown (cards yet to be played), and one faceup (cards ready to play). You can go through the stock only once. After you play a card from the faceup pile, the prior card underneath is now exposed, and can be played if there is now a place to put it. This pattern continues until you are unable to make a play.

On the tableau, only the top card of each column (or pile) can be placed on a foundation. Any card on the tableau, however, can be moved from one column to another, but all cards below that card must move with it. For example, if you move a 7 on top of an 8 and a 6 and 5 are below the 7, you must move all three cards to the other column. If the 7 is already below an 8, you still may want to move only those three cards in order to expose the 8 because it can be placed on the 7 in the diamond foundation.

Once a tableau column is left without an upcard, the next downcard can be turned faceup. If no downcard remains (in other words, no cards are left in the pile), you can place any king from another column into this empty column. Of course, if other upcards accompany the king, they, too, must move into the empty column. You can also place an available king from the stock into an empty column.

The game ends when either you transfer all cards to the foundations or you go through the entire stock and have no more plays.

Tip: If you have gone halfway through the stock with little play, start a new game. Too many cards that you will need for both ascending and descending sequences have been buried. It is even safe to predict that there needs to be significant action on the board before playing from the stock to have a good chance of winning.

Variation: Some prefer to draw third cards at once from the stock, in which case you can go through the stock as many times as you are able. The chance to win is greater in this version because it allows you to scan available cards and plan moves ahead. Luck plays a lesser role as well. You may only play the top card in your drawing of three cards. As in standard play, once a card is played, the beneath it can then be played. In this variation, however, you may choose not to play an available card after considering how cards might appear when you go through the stock the next time.