Browse the article How to Get Super Bowl Tickets 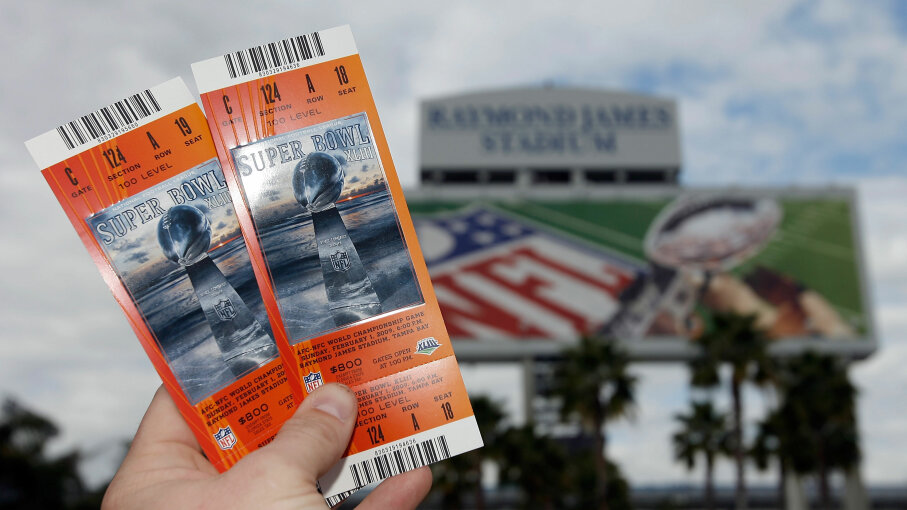 A fan holds up tickets outside the stadium prior to Super Bowl XLIII between the Arizona Cardinals and the Pittsburgh Steelers on Feb. 1, 2009 in Tampa, Florida. Kevin C. Cox/Getty Images

Super Bowl tickets aren't like concert tickets, where you can camp out the night before and be first in line when they go on sale. And there's no ticket website that you can refresh a thousand times per minute hoping to get lucky. The system for distributing Super Bowl tickets is closely controlled by the NFL, and the best way to get a ticket is either to be related to Tom Brady or to cough up a lot of money.

The Super Bowl is the most-watched sports event in the United States and the annual spectacle has expanded to include days of pregame concerts and special events in the host city. And ticket prices have expanded right along with it.

Tickets to the very first Super Bowl in 1967 cost an average of $10 (about $75 in 2018 money). Even by the year 2000, Super Bowl tickets were still averaging less than $500 when adjusted for inflation. But in the last decade, face-value ticket prices have risen astronomically — to a high of $3,245 in 2018 — and double or triple those prices on the secondary market [source: DePietro].

Before the 2018 NFL season, regular football fans could enter a lottery to buy Super Bowl tickets at face value. But that lottery is gone now, except for fans with disabilities [source: NFL]. Now only a lucky few season ticket holders will get a chance to buy Super Bowl tickets directly at face value, with most seats being sold at steep markups via ticket brokers. In fact, there were even fewer seats available for resale in 2019, which likely drove prices to record levels [source: Meyersohn].

Next we'll look at how the NFL divvies up Super Bowl tickets and who has the best chance of scoring a (relatively) cheap seat to the big game.

How Does the NFL Distribute Super Bowl Tickets?

Your best chance for buying a face-value ticket to the Super Bowl is to be a season ticket holder with an NFL team. If your team is actually playing in the Super Bowl, even better. That's because the NFL divvies up 75 percent of all Super Bowl tickets to each team in the league using the following math:

The remaining 25.2 percent of all Super Bowl tickets are controlled by the NFL and sold to various partners, sponsors, media and networks [source: Goldberg].

Not all of the Super Bowl tickets allocated to each team are sold to season ticket holders. Many will go to players and their friends and family. The remaining tickets are put into a lottery that randomly picks a lucky season ticket holder. The lottery winners can then buy the ticket at face value, which in 2018 was between $950 per ticket for nosebleed seats to $5,000 a pop for a skybox [source: Tornoe].

Keep in mind that just because you were selected in a lottery doesn't mean you are obligated to buy the tickets, but it's an excellent idea. Even if you're unable to go, you'll almost certainly be able to re-sell the tickets for much more than you paid for them on the secondary market.

But if you're not one of the lucky few to get chosen in random drawings, lotteries or sweepstakes, you'll have to turn to secondhand sellers. We'll offer some insight on how to play that game on the next page.

It should be clear at this point that getting Super Bowl tickets at face value or less is incredibly difficult. The only real option for most Super Bowl ticket buyers is to buy them online on the secondary or resale market.

Online ticket resellers like StubHub and SeatGeek work by connecting Super Bowl ticket buyers with ticket holders who want to sell. Those sellers may be individual season ticket holders who won their team's lottery or professional ticket brokers. The website makes money by taking a cut of the sales price and sometimes charging fees.

Pricing on the secondary market is pure supply and demand. Ticket prices go up or down based on the number of tickets available and how many people want to buy them. For example, in 2018 when it looked like the Minnesota Vikings might play in the Super Bowl — becoming the first team ever to play the big game on its home field — eager Vikings' fans caused ticket prices on the secondary market to spike before the home team lost to the Eagles [source: Roberts].

There's also a third option for deep-pocketed fans who want to lock in their Super Bowl tickets early. Announced back in 2016, the NFL has partnered with a third-party company to offer something called the NFL On Location Experience. Up to eight months before the big game, fans can buy high-end Super Bowl packages that include cheering players as they run out of the tunnel to celebrating with the winning team on field after the game [source: Rovell].

Ticket prices tend to spike right after a conference championship and fall as game day approaches, two weeks later. So, if you happen to live in or near the city where one of the championship game is played, it might be smart to wait till the very end if you haven't gotten your tickets yet [source: Goldberg]. You just might score a relative "bargain."

In an interesting twist, Super Bowl ticket prices on the secondary market historically get lower as game day approaches. That said, you don't necessarily want to wait till the last minute. The other costs of travel — like airplane tickets and hotel rooms — go up dramatically the closer you get to game day.