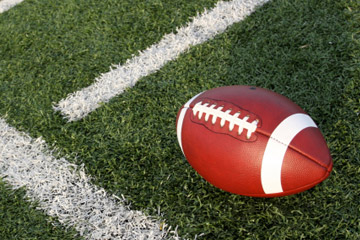 For many athletes, nothing compares to an open field and the ol' pigskin.
iStockphoto/Thinkstock

No doubt about it, football is an intense sport, U.S. football, that is. Even the terminology is distinctively tough and aggressive. To paraphrase the late George Carlin, you have a gridiron, the air attack, the ground defense, the field generals avoiding a blitz and the offensive squad marching down the field. It's no wonder that people who love physicality enjoy this game.

But if you're an adult employed in a field other than professional sports, it's probably been a dog's age since you tossed around the ole pigskin. Or at least a Thanksgiving or two. Never fear. If you still have the itch to join a game, there's a local league that can scratch it. In fact, there are plenty of options available, no matter your skill level or competitiveness. And there are plenty of great reasons to join a league.

Maybe you just moved and you want to make new friends while getting some exercise. Perhaps your competitive spirit still burns strong even though your years are advancing. Maybe you just enjoy getting your blood pumping while enjoying the sights and sounds of being outdoors.

Ready to get started? Here's the first play, read on to learn about different kinds of leagues. Hut, hut, hike! 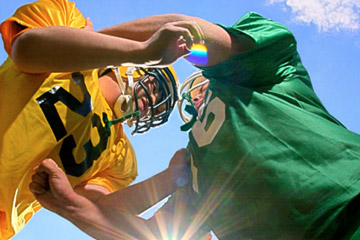 A semi-pro league can offer you an opportunity to play highly skilled opponents and, perhaps, get a shot at the big time.
©Getty Images/Comstock/Thinkstock

One of the fastest growing types of football leagues are a variation of the game you played back in elementary school -- flag football. Leagues are set up through your city recreation department or even through national organizations that have affiliates in your city. And here's the great thing -- you can choose the league that best suits your skill level. Whether you're the ultra-competitive type that doesn't mind a little pushing and shoving or you're someone who just wants to have a little fun, there's a level suited for you.

Flag football leagues may be broken up into sections, depending on what level or team size interests you. You can join a team that ranges from four to eight players and will vary in terms of competitiveness. Want a fast game involving some contact? Try a four-person A-level league. Interested in more strategy and less pushing? Try an eight-person team at D level. Coed leagues are also available in many regions of the country and tend to focus on people who enjoy the social and health benefits of playing rather than aspiring to become a champion or elite athlete [source: Georgia Sports League].

But let's say you're super aggressive and eager to display your skills on the gridiron. Flag football, while fun, just doesn't do service to the rough-and-tumble game you're familiar with. If that's the case, you might consider checking out a semipro league. Semipro football teams play in full pads, and they take part in the traditional, full contact variety of the game. Tryouts determine who makes the squad and even if you earn a spot on the roster, you won't likely get paid. But you'll be able to keep playing the game you love [source: Gridiron Development Football League]. Who knows, maybe you'll impress an NFL scout and get a chance at the big time.

Once you've decided which league is right for you, it's time to find the right place to play. Run a post pattern to the next page to learn more.

Finding a Football League Near You

There's a good chance a flag football league already exists near you. Start with an established database that lists a variety of leagues. A site like Flagmag.com will provide you with information by state, if you live in the U.S., or by country. A lot of independent leagues will allow you to create a team consisting of friends and colleagues, or you can sign up as an individual and be placed with a team. They'll also provide basic equipment and referees. You won't have to quibble over rules; you can just play the game [source: Flagmag].

City or county recreation departments are also great resources. They operate much like independent leagues, but they offer a few more options. For instance, you'll probably be given a choice of skill levels so you won't be under- or overmatched on the field.

If you're focused on semipro ball then you'll need to attend the next tryout in your area. Most semipro teams hold open tryouts several months before the beginning of the season. Tryouts will test your agility and speed, as well as your basic football mechanics (kicking, throwing, catching and blocking) [source: Atlanta Chiefs].

If you're not sure whether you're more suited for flag or tackle football, amateur or semipro, consult some local leagues. They'll often have open meetings so you can learn more and determine what's right for you.

For lots more information, click over to the next page.