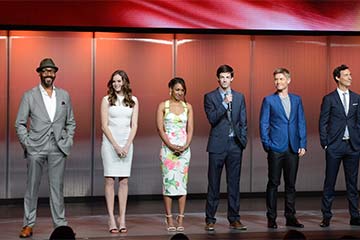 Actors from the CW show 'The Flash' speak at an 'upfront.' Networks show their programs to advertisers in hopes that they'll buy commercials 'up front' or in advance of the fall season. It's always held at the end of the May sweeps period. See pictures of TV Shows.
Kevin Mazur/WireImage/Getty Images

Sweeps Week is a throwback to simpler times, when Americans watched TV shows on actual TVs — rather than laptops, tablets and smartphones — and 50 million people sat down to the same episode of "I Love Lucy" at the same time on the same channel all across the country. In 2013, a show on ABC was lucky to get 5 million viewers [source: Stelter].

Sweeps Week was the brainchild of the A.C. Nielsen Company, which popularized TV ratings in the 1950s and whose TV audience numbers are still the industry standard. In 1954, Nielsen sent "TV diaries" to households across America, asking them to record their precise TV viewing habits for a week. Then, in a geographic "sweep" starting in the Northeast and moving to the West, Nielsen collected the booklets, compiled the data and published the first accurate reports on the viewing habits of American families [source: Fletcher].

Why does it matter how many people watch "Modern Family" or "Real Housewives of Moscow" on a Wednesday night in Topeka, Kansas? Because both the national TV networks and local TV stations both depend on advertising to make money. With detailed information about the size of the local TV audience, the local TV station can charge advertisers more for commercial spots during the most popular shows and the most active times of day.

Today, Sweeps Week is four separate four-week periods spaced throughout the year. ("Sweeps Month" is more like it.) Sweeps Week remains an important gauge for TV advertisers, even though the entertainment landscape looks very different than it did in the days of "The Honeymooners" and the "Ed Sullivan Show." In the 1950s, TV viewers chose between three or four broadcast channels. Today, the typical home includes cable or satellite TV with hundreds of channels, plus online access to streaming TV via computers and mobile devices.

As Nielsen and its competitors struggle to get an accurate headcount of a highly fragmented TV audience, some TV networks and local affiliates are losing their faith in the institution of Sweeps Week. Keep reading for a closer look at how TV ratings work and to learn how Sweeps Week is fighting for survival in the Internet era.

TV ratings are a form of audience measurement adopted from the early days of radio in the 1930s when surveyors would randomly call households and ask about their listening habits [source: Gross]. The object of audience measurement has always been the same, to accurately gauge the audience size for a network, station or individual show and use that information to sell on-air advertising, what we call commercials.

The TV networks set prices for their national commercials based on national ratings data provided by Nielsen. National ratings are expressed as a percentage of all of the households in America with a TV set that are watching the network at a given time. Ratings are further broken down by demographic segments. Adults 18-49 years old, for example, are a favorite demographic for advertisers, since consumers in that age group tend to buy more stuff.

Nielsen collects its national TV ratings data via two methods: set meters, which capture which channel the TV is tuned to, and its patented "people meter" system. With the latter device, each member of the household has his or her own button on a special remote control to indicate when they are tuning in to a particular station. These people meters track the viewing habits of approximately 45,000 people in 20,000 homes in the 56 largest TV markets [sources: James and Nielsen].

For Sweeps Week, Nielsen still sends out millions of paper diaries to collect viewing data on local TV audiences, except for the very largest markets [source: Manly]. This geographically specific data is what local affiliates use to set their own advertising rates. Since paper diaries take much longer to process, Nielsen confines Sweeps Weeks to four, four-week periods throughout the traditional television season with Sweeps in November, February, May and July.

Next we'll explore why Sweeps Week has been blamed for some of the most sensational moments in TV.

A rating is the percentage of American households watching a show out of every household that owns a TV. A share, on the other hand, compares the number of households (or individual people) watching a show to the total number of TV sets that are actually on. Shares are always higher than ratings, but are a better indicator of a show's popularity relative to the competition [source: Gross]. 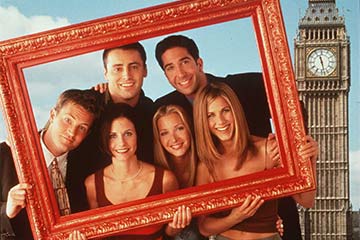 The End of Sweeps Week?

Critics of Sweeps Week argue that Nielsen and the broadcast TV networks are relying on an outdated ratings system to measure a 21st-century TV audience. Not only should Sweeps Week be dropped, but the Big Four broadcast networks — ABC, CBS, NBC and Fox — need to rethink their entire business model.

Nielsen already has the "people meter" technology to automatically track half of the TV sets in America. The paper diaries used during Sweeps Week, on the other hand, are wildly undependable, relying on the bad memories and general laziness of the average American couch potato. If Sweeps Week data isn't accurate, and Nielsen has the power to collect instant audience data for local as well as national markets, why not drop Sweeps Week altogether?

For years, advertisers have been asking Nielsen to do away with the paper diaries and rely on more people meters. In 2006, Nielsen announced it would do away with the diaries, but as of 2014, this hasn't happened [source: Adgate]. Is it a question of money? A lack of competition and therefore incentive to change?

Broadcast TV is under attack from several fronts. Cable channels are pulling viewers away from the Big Four in droves. There simply aren't enough ratings bonanzas like "Monday Night Football" and "American Idol" on the broadcast networks to contend with cult cable hits like "Breaking Bad," "The Walking Dead," and "Game of Thrones." Viewers in the coveted 18-49 demographic are fleeing the fastest, with broadcast losing 17 percent of that audience from 2012 to 2013 alone [source: Stelter].

And then there's the Internet. Netflix has established itself as a major player in streaming TV. The Big Four networks rebroadcast their shows through Hulu, but Nielsen does not currently count online viewers in its ratings. Back in February 2013, Nielsen announced plans to track streaming video, but no such system is yet in place [source: Kelly]. Rival ratings firms like comScore are trying to fill that gap by selling data on digital viewership to the networks [source: Sharma and Stewart].

While revenue at the Big Four broadcast networks is at an all-time low, business at many cable networks (TBS, USA and ESPN, especially) is booming [source: Kissell]. One of the big reasons for this is the failure of the broadcast TV business model, which relies almost exclusively on advertising dollars for revenue. Cable, on the other hands, gets some money from advertising — cable channels use their own Nielsen ratings to set advertising rates — but also a handsome cut of the subscriber fees that households pay every month for cable or satellite service. Netflix also runs on the subscription model. And while broadcast TV mainly adheres to the traditional fall-to-spring TV season (because of Sweeps Weeks), cable and online shows are free to premiere all year round [source: Adgate].

Nielsen appears to be getting with the program — it now tracks social media impressions through its Twitter TV ratings — but it might be too late to save traditional broadcast TV and the attention-grabbing antics of Sweeps Week.

For lots more fascinating explanations of the entertainment industry and pop culture phenomena, check out the related stories on the next page.

In addition to counting ratings for the live original broadcast of a TV show, Nielsen also releases numbers for "delayed viewing" through DVRs and video on-demand. Advertisers are starting to pay particular attention to the "Live+7" numbers — total views of a TV show a full week after its live broadcast — since ratings for popular shows can increase 50 percent or more during delayed viewing [source: Faughnder].

I don't know anyone who watches broadcast TV. OK, that's not true. I don't know anyone who watches broadcast TV in the traditional sense, meaning tuning into ABC or NBC on a Tuesday night at 8 pm to watch the latest episode of a favorite sitcom. I know plenty of people — myself included — who hear about a good network TV show and watch a couple episodes online when they have an hour to spare. These 30 spare minutes almost never occur at 8 p.m. on a Tuesday. With mobile apps for Netflix, Hulu and several premium cable channels, you don't even have to be home to watch TV — airports and dentist waiting rooms are excellent venues. The very concept of Sweeps Weeks — hinging an entire business model on mailed paper viewing diaries — seems wildly out of step with modern, mobile-ready entertainment and will almost certainly go the way of the dodo.

Disney Is Diving Into the Streaming Wars
People Are Spending Two Months In Jail for a Reality Show
Who runs public access TV channels?