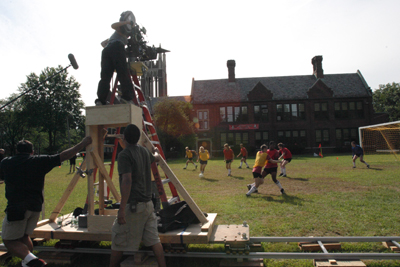 Filming on the set of "Gracie"
Image by K.C. Bailey/courtesy© 2007 Picturehouse

"The heart of the story was one I've wanted to tell for about 10 years," says Andrew in discussing the genesis of the film. "In the beginning I wanted to tell a story that paid tribute to our older brother Will, honored our cherished childhood together and used our family sport (soccer) as a backdrop. The story came into focus, however, when I enlisted Davis and my sister Elisabeth to help. Davis saw that it could also be a way to celebrate my sister and the experience she had playing soccer with boys and growing up in our male-dominated family."

"The great thing about this project is that our whole family's involved," says Andrew. "It really is a dream to get to be able to work with my sister and work with Davis and work with my brother, John who graduated from Harvard Business School and was instrumental in helping us solve all the financial issues we faced. We didn't set out for it to be a family movie, but then as it started to happen, it was clear that we all needed to be involved."

With the Shue's extended family working together, the shooting of "Gracie" did not come without its own challenges. "The most difficult thing is the feeling that there's this real family whose story you're telling. You want to feel like you're not cheapening their lives and make sure that you're telling that story in a fair and truthful way," says Guggenheim. "We had long talks about that issue, Elisabeth and I would discuss how we could use the family history as a starting point, but ultimately the actors had to find their own characters."

One element of the production that was important to the filmmakers was their decision to shoot the film in New Jersey, where the Shue family spent their childhood. "We talked about shooting it in Canada and trying to save money and we just felt it was crucial to film it in New Jersey," says Andrew. "It's been great coming home and spending time in the area. We've shot a bunch of scenes in South Orange and Maplewood and the State of New Jersey has played a huge role in the funding of the film, so it's really been a home-grown project and it's nice to have that kind of support."

Not only did the film shoot in the Shue's home state, but Andrew and Elisabeth's high school, local pizzerias, and teenage hangouts all make appearances. Says Andrew: "It was really special to be in our high school, it just means a lot to walk in there and know that you're coming back, to walk down the same path that you traveled before and to actually have your movie set be the place that you grew up-it's pretty magical. The scenes come alive because it's real."

The magic continued for the Shues when they were able to get the Boss involved. Bruce Springsteen, the Garden State's master poet, made a rare exception and provided his song "Growin' Up" for the film's pivotal montage.

"I hope that everybody who sees this film laughs at least once, cries at least once, and cheers at least once. If we've done that, we will have succeeded," says Elisabeth. "Most importantly, I hope that people who see the film realize that no matter how tough life gets, if you stick together with the people you care about, you can get through anything. Like Johnny says to Gracie in the beginning of the movie -- 'You can do anything' -- my brother Will taught us that with his love we could... the journey of making this film is proof of that."

For further information about the movie, soccer and other great HowStuffWorks articles, visit the next page.