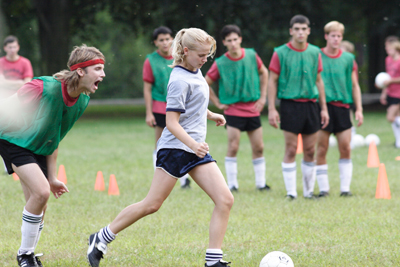 While it was a given that the Shue siblings would have parts in the film -- Andrew plays Coach Clark and Elisabeth plays Gracie's mother -- finding the right actress to play the title character proved a real challenge.

Fortunately, the producers found Carly Schroeder, an experienced actress ready for her first starring role and more than willing to commit to the weeks of grueling training required to carry off the soccer scenes. Schroeder was already a respected actress with several major credits under her belt, including 2004's "Mean Creek" and 2006's "Firewall," in which she co-starred alongside Harrison Ford and Virginia Madsen.

In order to make her game play convincing, Schroeder had to endure 12 weeks of intense training under the supervision of Dan Calichman, a former player and captain of the Los Angeles Galaxy. "We knew Carly could pull off the emotional scenes," Shue said, "but the on-the-field scenes were just as crucial. Because we weren't going to cheat it. It's really Carly out there running around, kicking the ball and getting pummeled by the boys."

In fact, Schroeder did all her own legwork with the ball, except for one crucial scene. The opening moment of the film features Gracie trying to knock a soccer ball off the hood of a car to win a bet on behalf of her brother. "We tried for over an hour to do it for real," Schroeder says, "but we couldn't get it. So that one we had to fake."

Adds Elisabeth Shue, "We did see some amazing actresses, but there was something about Carly that was so unique. She has such a strong, willful spirit and her fierceness is so visceral and raw with a real need to prove herself, which I think is so much Gracie. But it was her ability to expose the pain that Gracie faces when she loses her brother which was most extraordinary."

Director Guggenheim adds, "I kept needing to remind myself that she's only 15. She's got the experience and the technique of an actor who's 20 years older but she's also got this fierceness that many seasoned actors don't have. As a director, you dream of having actors as talented and charismatic as her."

Filling out the rest of the ensemble required no less effort. The most pivotal role in the film opposite Gracie is that of her father, Bryan Bowen, a part that required an actor of considerable range and subtlety. The filmmakers were fortunate to get actor Dermot Mulroney, known to many from a 20-year body of work including "Young Guns," "The Trigger Effect (also starring Elisabeth)," "My Best Friend's Wedding" and "About Schmidt." Bowen is a man who can't see Gracie for who she really is before his son's death, but who, like his daughter, finds a reason to dream again in the wake of an enormous tragedy. The dynamic between these two characters -- the tug of war, and ultimately, their journey together -- is the heart of the film.

The authenticity of the story was going to rest with this casting choice. We really lucked out when Dermot agreed to take the part. He not only happened to have played soccer in high school, but he was an actor that effortlessly embodies authenticity. Dermot understood the broken nature of this man and how he had to so subtly change and begin to heal as he finally is able to see and accept his daughter in his life for the first time.

Next, we'll see how the production really became a family affair.

Meet the Cast & Crew of "Gracie"