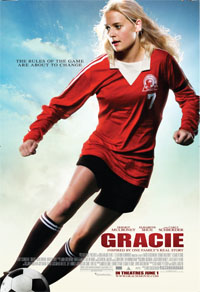 "Gracie" is an inspirational film about a teenage girl who honors her brother by trying to take his place on all-male high school soccer team during a time when there weren't any girls' soccer leagues. In the glut of big budget summer movies, "Gracie" represents an anomaly, an independently-produced feature film with a strong message about pursuing your dreams in spite of overwhelming obstacles. But what exactly makes "Gracie" different from other recent soccer movies?

Although soccer is the biggest sport in the world in just about every nation except the United States of America, "Gracie" can be truly called the first American soccer movie. "Gracie" is also inspired by true events in the lives of its celebrity producers, Andrew and Elisabeth Shue.

We'll learn more about the genesis of the film in the next section, but first, here's an overview of the story:

Living in South Orange, New Jersey, 15-year-old Gracie Bowen (Carly Schroeder) is the only girl in a family of three brothers. Her father (Dermot Mulroney) and brothers are obsessed with soccer, practicing in the backyard's makeshift field every day. Tragedy unexpectedly strikes when Gracie's older brother Johnny (Jesse Lee Soffer), star of the high school varsity soccer team and Gracie's protector, is killed in a car accident.

Filled with grief, Gracie decides to fill the void left on her brother's team by petitioning the school board to allow her to play on the boy's high school varsity soccer team. Her father, a former soccer star, tries to prove to Gracie that she is not tough or talented enough to play with boys. Her mother, Lindsey Bowen (Elisabeth Shue), is already an outsider in the sports-obsessed family and can't offer any help. Undeterred, Gracie persists in changing everyone's beliefs, including her own. She forces her father to wake up from his grief and see her as the beautiful and strong person that she has always been. She also brings her family together in the face of their tragedy.

In this article, we'll examine how "Gracie" was conceived, cast, and produced. And don't forget to watch exclusive behind-the-scenes video from the production of "Gracie," shot by the producers just for HowStuffWorks.

Meet the Cast & Crew of "Gracie"