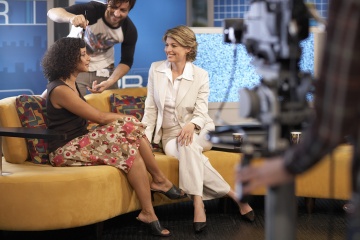 You may scoff at the presenters on your local public access television station, but the history behind these stations is rich. And they have been the launching pad for many of today's superstars.
Fuse/Thinkstock

Sarah Jones recorded an interview at the local police station with a mayoral candidate about area crime rates. Joel Wymbie sat down with super fans at a local coffee shop to discuss the new "Star Wars" trailer, using a remote camera to record the event. George Allen spent the better part of a Saturday afternoon in front of two studio cameras as he filmed a two-part episode on Russian literature.

Public access television may give you visions of "Wayne's World" parodies, but for many people around the United States, public access TV is a vital way to share information, creativity and foster community relations.

By its very definition, public access television is a free channel that airs programming created by the members of the general public. The advent of public access TV occurred in the early 1970s under Section 611 of the Communications Act, a landmark decision that gave local franchising authorities the ability to require cable companies to set aside channels for public, educational or governmental (PEG) use. A franchising authority is, in most cases, a city or municipality that has a contract with a cable company that defines the services that will be provided to the community. Local franchising authorities are not mandated by federal law to request the channels, it is an option they can exercise at will.

Public access channels also are known as community access, community television or cable access channels. A public access channel can be run by a cable company or by a third party designated by the cable company. Regardless of which party operates the channel, it must offer the crucial gear and knowledge that goes along with producing television, too. This includes making the studio, equipment and behind-the-scenes staff available to people who want to air a show on public access television. Most guidelines also include free training on specialized tracks, from on-air to production [source: FCC].

Public access television is available in communities across the United States and Canada, and in countries such as the United Kingdom, New Zealand, South Africa, Austria, Fiji and more [source: Public Access TV].

If you're interested in becoming part of the public access TV channels in your area, first check with your local stations, cable provider or city hall to identify which sources to contact. Although it may vary by region, in most cases you'll need to attend an orientation and take production training classes before airing your own program on cable access TV.

Although it may seem like a completely altruistic move to allow the public to freely create TV shows for the broader community, it's not entirely without cost. In fact, if you're a cable subscriber, you're probably paying for the shows that air on public access TV. The fee that shows up on your cable bill depends on the percentage of revenues a municipality has asked a cable company to pay and the cable tier you've purchased. Simply look for the PEG fee on your bill, which may be less than a dollar or more than several dollars a month [source: Rosenberg].