How do helicopters film crab boats in rough weather? 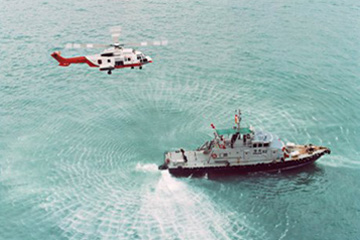 Camera operators and directors know there are some shots you just can't get from ground level. It might be a long approach, a very wide shot showing a sense of massive scale or an overhead perspective that captures the action. On land, you might get away with using a crane. When you're filming crab boats, however, your only option is a helicopter. There's good reason for this: A helicopter provides a relatively stable platform for filming and allows for precise camera motions that aren't possible with an airplane.

During storms, helicopter pilots also have to deal with strong winds and heavy rain. The electronics in helicopters are notoriously vulnerable to moisture, so they're often treated with special compounds that protect relays and connections from corrosion. For filming, a helicopter will have a special camera dome mounted below the cockpit. This camera is controlled remotely by the camera operator as the pilot steers the plane.

There's a limit to how much risk is worth a good shot. If the weather becomes too severe, a camera helicopter becomes a danger not only to its own crew, but to the boat it's filming. Visibility becomes an issue as well -- eventually, the camera won't be shooting anything but rain. While helicopters and their crews can operate in severe conditions when necessary (during a Coast Guard rescue operation, for instance), a camera helicopter generally won't take these risks and will call off the flight when the weather turns sour.

If you're interested in piloting a helicopter used in filming, the exact qualifications you need will vary depending on what nation and state you're shooting in and what professional organizations or unions you're part of. You'll typically need a commercial pilot's license, but other certifications may be necessary as well, depending on the shoot.