October 21, 2015, is a momentous date in history. Or at least, it is in the annals of movies that envision a world to come. According to the 1989 sci-fi comedy "Back to the Future Part II," it's the date on which 1980's teenager Marty McFly (Michael J. Fox), eccentric time-travel inventor Dr. Emmett "Doc" Brown" (Christopher Lloyd) and Marty's girlfriend Jennifer Parker (Elisabeth Shue) arrive in what for them is a future version of their California hometown. For us reading this article? That's right now.

"Back to the Future Part II" is just one of a long line of movies that envisioned specific moments in the future, and as you may have noticed, Hollywood prognostications often turn out to be bizarrely off the mark. Case in point: A computer network equipped with self-awareness didn't lead machines in a bloody rebellion against humans on April 21, 2011, as envisioned in the "Terminator" movie franchise.

But in contrast to the dark dystopias that many sci-fi films depict, director Robert Zemeckis and screenwriter Bob Gale went for a more upbeat vision, imagining everyday life in 2015 as being filled with strange, wonderful and sometimes comically wacky technology.

The imaginative tech in the film ranged from hologram billboards and mailboxes equipped with fax machines, to clothes that robotically adjust their size to fit the wearer.

"We were just trying to have fun with the future," Gale recalled in a recent Vanity Fair interview. "We want to present a future that's optimistic and a future that's fun and funny. It is a comedy, after all."

What's intriguing, though, is how close Zemickis and Gale accidentally got to the actual 2015 in which we live. A surprising number of their imagined inventions actually exist in some form today. Here are a few examples of what they got right.

Sneakers with power laces: Nike already has patented an "automatic lacing system" that would tighten itself, the way that Marty McFly's sneakers do in the movie, and various publications reported in January that the company actually would release such a shoe this year. So far, it hasn't happened, though.

The 2011 NIKE MAG shoe, based on the original shoes worn in the fictional 2015 by the "Back to the Future" character Marty McFly.
DANNY MOLOSHOK/Reuters/Corbis

Smart Homes: The McFly family of 2015 lives in a house where the front door is unlocked by scanning a fingerprint, gadgets are controlled by voice commands, robots help serve meals, and a disembodied synthetic-sounding voice reminds anyone going into a room that "it's dangerous to enter without lights on." In the real today, smart homes equipped with sensors and automated gadgetry are an emerging trend. Apple, for example, recently unveiled its HomeKit technology, which allows users to do everything from raise their window shades to turn on the tea kettle through the Siri intelligent assistant. British company Moley Robotics has developed a robotic chef that can cook meals, and there's already is an assortment of biometric fingerprint door locks on the market.

Home entertainment systems: The McFly family has a huge flat-panel TV set, a gadget that in the real world first hit the market in the late 1990s. (Check out this vintage commercial below for Philips' early wall-hanging flat-panel TV).

Video calls: In the movie, the middle-aged version of Marty McFly uses his TV for a video chat with a conniving coworker. Today, it's possible to do the same thing. People have been using Internet-based video-conferencing services such as Skype on their computers for years, and some some TV sets on the market now come with cameras and Skype video-conferencing software already installed.

Flying cars: The movie depicts passenger vehicles zooming through the air at breathtaking speeds between towns, a capability that anyone who's been stuck in a real-life traffic jam would envy. While we don't yet have flying cars, a company called Terrafugia is working to develop such vehicles. One model, the TF-X, would be able to cruise aloft at speeds of up to 200 miles (321.9 kilometers) per hour, with automated collision-avoidance technology that would keep it away from other aircraft and out of airport airspace.

Biofuel: In the movie, Doc scoops up some household garbage to power his customized DeLorean. In the real world, you can't yet do that unless you install a DIY-gasification system on your car, which looks a bit unwieldy. However, a Canadian company called Enerkem has developed a method for converting ordinary trash into low-cost biofuel, which could be sold at filling stations just like regular gasoline.

Hoverboards: This is one we're still waiting for. Carmaker Lexus, for reasons that aren't quite clear, has developed a hoverboard prototype that uses superconductors and liquid nitrogen to create a magnetic field that will enable it to float... but it only will work on a special track filled with magnets. A tech startup called Hendo also has developed a similarly limited board. So it'll be a while before some McFly wannabe can sail down the streets or over a pond, as the character does in the movie.

But then again, we're just scratching the surface. Why not go straight to the source?

Now That's Cool
While dehydrated pizza as shown in the film doesn't yet exist, military scientists have managed to devise pizza that will stay edible at room temperature for up to three years, thanks to special chemical ingredients and sauce, cheese and dough whose acidity has been tweaked to keep them from spoiling.

This Just In: Know-it-alls Know Nothing at All 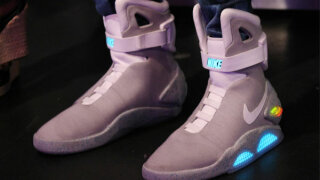 FW:Thinking Podcast: Back to Back to the Future II, Part One 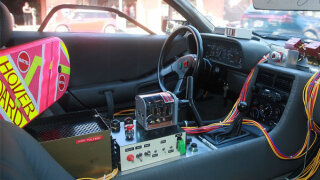 FW:Thinking Podcast: Back to Back to the Future II, Part Two 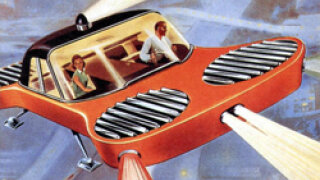