Browse the article Inside "Hotel For Dogs" 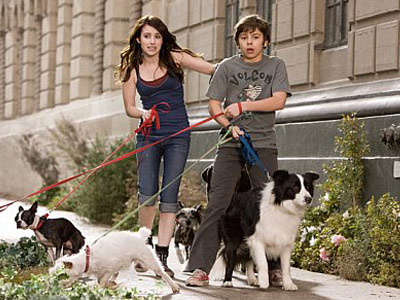 Dog Image Gallery After finding a place to hide their dog Friday, Andi (Emma Roberts, left) and her brother Bruce (Jake T. Austin, right) eventually wind up giving shelter to most of the strays in town in the comedy/adventure "Hotel for Dogs." See more dog pictures.
© 2008 DreamWorks LLC and Cold Spring Pictures. All Rights Reserved. Photo by Jaimie Trueblood.

­W.C. Fields famously warned against working with animals and children, but the makers of "Hotel for Dogs" ignored the advice to bring an effects-filled comedy about kids who rescue dogs and hide them in an abandoned hotel to the big screen. Wrangling up to 70 canines at a time was no easy feat, but if the blockbuster popularity of "Marley & Me," featuring just one dog, is any indication, this puppy could unleash some major box office coin.

Based on the children's novel of the same name by Lois Duncan, the movie stars Emma Roberts ("Nancy Drew") and Jake T. Austin (Disney Channel's "The Wizards of Waverly Place") as an orphaned brother and sister who have been keeping their dog Friday a secret from their wannabe-rocker foster parents (Lisa Kudrow, Kevin Dillon) and social worker (Don Cheadle). They then start acquiring other homeless canines, stashing them in a dilapidated old hotel. First-time feature director Thor Freudenthal had the daunting task of directing the dogs -- and their trainers.

With at least one double and a pair of trainers for each featured dog, this was one crowded -- and noisy -- set. "Preparation was essential," acknowledges Freudenthal, a TV commercials director who'd worked with dogs before, but never this many. "The key is really to storyboard and know exactly what pieces you need from the dog," he says.

Drawn to the idea of unwanted kids taking in unwanted animals and the chance to create a fantasy sort of haven with fun visual elements, the director signed on and spent months searching for a mix of just the right pooches, many of which were rescue pups. "I wanted a variety of types that are funny, that have personality," he notes.

­"You start out with what's written as far as the ideas for the characters and look for breeds that embody that," adds producer Jason Clark. "We cast the dogs before we cast people, 16 weeks before we started shooting the movie, and the personalities emerged through the training process."

But no matter how well trained they are, "It's a challenge to get 50 dogs to do the same thing when you want them to do it," emphasizes Clark. "They hav­e a mind of their own. Kids and animals come with their own set of parameters," he adds, reminding that there's a limit to the amount of hours that minors can work.

­Obviously, it was necessary to prep the dogs months ahead of time, which involved basic commands and more specific behavior training, bonding time with the actors, and early mockups of the gadgets and contraptions the dogs would have to use on set. In the following sections, we'll discuss these challenges and others the filmmakers faced. 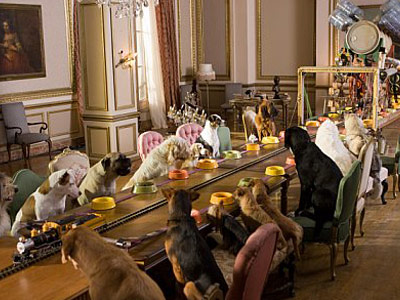 A few of the residents in "Hotel for Dogs."
© 2008 DreamWorks LLC and Cold Spring Pictures. All Rights Reserved. Photo by Jaimie Trueblood.

­With so many dogs featured prominently in the movie, it was imperative that the filmmakers find the right ones, particularly for the part of Friday. Mathilde Decagny, who'd trained the dog that played Eddie on "Frasier," rescued the wire-haired terrier Cosmo from a shelter. "He was a scared little dog and now he's so outgoing," she says. Cosmo had to learn several tricky sequences including one in which he followed the aroma of a hot dog through city streets and a kitchen scene in which Lisa Kudrow remains oblivious to his presence.

Three Boston terriers played the role of Georgia, a compulsive fetcher, but four-year-old Nubbin, a male rescue from a puppy mill, had the most screen time. "He was the action dog," says trainer Melinda Eichberg. His trickiest stunt required him to be in a harness and be catapulted through the air. He now has a recurring role on the sitcom "Kath & Kim."

­Cross-gender casting was also in play in casting the "couple" Romeo and Juliet. Dolly, a female Chinese crested, was the principal Romeo and Dash, a male poodle, was the main Juliet. To get them to lick each other's tongues, something dogs don't do as a rule, required creativity. "We put a piece of Plexiglas between them with food on each side, and they licked," reveals Thor Freudenthal. Then in post-production, "We took the partition out and extended their tongues a bit. It was really the only digital manipulation we did."

It didn't take as much effort to get Buster, a four-year-old bulldog, to adopt the behavior of chew-happy Cooper. Ironically, sighs trainer Kristy Gerosky, "He had just outgrown the chewing habit when he got this part." Buster did the lion's share of the work. "We did have a double for him but she only did a couple of scenes," Gerosky reports. "She was better behaved but wasn't as good at chewing up everything."

Freudenthal would choose dogs for a particular task based on their demeanor and talents. For example, in a scene where Georgia plays fetch with a tennis racquet, "One dog was very good at fetching but then just stood there. We combined two dogs in the same scene."

While the actors rehearsed with the dogs for several weeks during pre-production, ultimately food was the secret weapon on set. "We would put baby food on our finger and they would lick it off," reveals Emma Roberts. "They smeared chicken-flavored baby food on my face whenever they needed the dog to lick me," adds Jake Austin.

Emma Roberts plays a spoiled Malibu princess who's shipped off to an English boarding school in "Wild Child," to be released May 8. She has also completed "The Winning Season," a basketball movie due out later this year.

Jake T. Austin next appears in "The Perfect Game," about Mexican Little Leaguers who become the first non-U.S. team to win the championship

Jason Clark is working on an adaptation of the classic TV cartoon "Mr. Peabody and Sherman" for DreamWorks Animation, "We're going to try to keep the irreverent sensibility," he says.

Thor Freudenthal has optioned a pair of scripts, "Diary of a Wimpy Kid" and "Measle and the Wrathmonk," to possibly direct in 2010 and 2011 respectively. 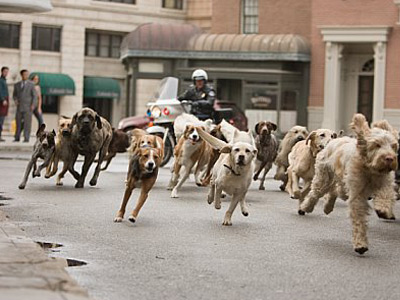 Some of the residents of the "Hotel for Dogs" make a run for it after the police discover their lair.
© 2008 DreamWorks LLC and Cold Spring Pictures. All Rights Reserved. Photo by Jaimie Trueblood.

­"Hotel for Dogs" was largely shot in downtown L.A., standing in for an unnamed east coast city. "I wanted it to feel not clearly defined. It's a fantasy world that could be anywhere," explains Freudenthal. "The hotel was two different places," he continues. "The downstairs was the Park Plaza Hotel in MacArthur Park, which has been used before but not in this way. We trashed it and made it look like it's condemned. The upstairs was the Alexandria Hotel. It had these wonderful long hallways." The front of the hotel was shot at Universal Studios in a section of the lot destroyed in a fire a week after the company shot there.

For the exterior scenes, shooting on city streets with dogs "was really difficult because it was hectic to shoot around the traffic, the noise, and the homeless people walking into our shot," notes Roberts. "There were always sirens and ambulances." Downtown traffic noise wasn't the only sound issue. With scores of trainers shouting commands at the dogs, "There was a lot of cleanup in the sound in post-production," says Clark.

Because it was impractical to shoot the climactic chase scene completely on location, it was shot

In three different places, including back lots at Paramount and Universal. To show a large pack of dogs running simultaneously, the effects team built little green tunnels for the dogs to run through so they stayed in line and shot against a green screen so the tunnels would be invisible. "We'd shoot multiple passes, and when we'd composite all the passes together we'd have four lines of dogs all running at the same time," Clark outlines.

At one point, stampeding canines trampled Roberts. "I tripped because the ground was wet. I fell and skinned both my knees, and the dogs were trampling over me," she recalls.

Some of the movie's most memorable scenes involve the ingenious machines that Austin's character Bruce, a budding inventor, devises to help the kids care more efficiently for the dogs and keep them occupied. Among these were feeding and waste management systems made from salvaged items Bruce finds in the hotel. Special effects coordinator Michael Lantieri, who won an Oscar for "Jurassic Park," devised the Rube Goldberg-reminiscent contraptions.

In one scene, 40 dogs sit at a long dinner table, their bowls filled by a conveyer system Bruce has rigged. Other inventions include a sheep-herding machine for the border collie Shep and a head-out-the-car-window simulator.

"What's wonderful about these things is not their sophistication but their simplicity in how they get the job done," observes Clark. "You really believe that a kid invented them. But we had to make them work mechanically."

­Freudenthal is thrilled with the end result, but he's calling a moratorium on working with non-humans for the time being. "I'd be open to good character-driven movies that take me places, magical or not," he says. "But working with animals? I'll leave that to somebody else."