Browse the article What's Your Sign? Understanding the Chinese Zodiac 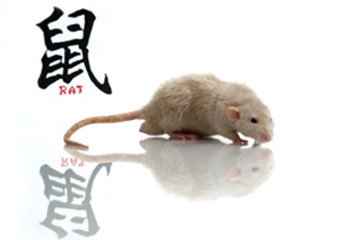 Eek -- it's a rat! Don't worry: In the Chinese zodiac, the rat is imaginative, charismatic, shrewd and witty.
Jupiterimages/Photos.com/Thinkstock

Have you ever sat down at a Chinese restaurant and found yourself staring at a placemat with various animals and dates on it? Chances are, you were looking at the animals of the Chinese zodiac, a part of the Chinese calendar that cycles every 60 years. The animals of the zodiac represent particular personality traits, and people have looked to these figures for thousands of years to help them understand the world and their role and future in it.

The Western zodiac and its horoscopes predict or describe events happening on earth, while the Chinese zodiac is a cyclical calendar composed of different elements. The Chinese developed their zodiac sometime before 1000 B.C. Their complex astrological system divides the year into 24 parts, then combines them with a 28-part lunar zodiac and 12 branches corresponding to specific animals. We know that the Chinese zodiac was developed thousands of years ago, but we don't know its exact origins. Even so, a there are clues that give us a glimpse of how some believe this astrological system came to be.

One of the most popular legends explaining the Chinese zodiac claims that Buddha invited the animals of earth to a celebration in heaven. Twelve animals attended the celebration, and the first to arrive at the party was the rat. He was followed by the ox, the tiger, the rabbit, the dragon, the snake, the horse, the ram, the monkey, the rooster, the dog and the pig. Some stories describe how the animals competed with one another to get to the celebration first. Although the specifics of the legends can differ slightly, in each story the order in which the animals arrived was the same and determined their place on the zodiac calendar.

According to the Chinese zodiac, the unique personality of each animal is passed on to those born in the years it rules. For example, the rat is said to represent creativity and innovation. The persuasive, imaginative rat is a quick thinker and serves as the leader of the Chinese zodiac. Those born during the year of the rat, according to the zodiac, have these qualities as well. Similarly, those born in the year of the ox are seen as stable and hard-working. Characteristics of the other animals are as follows:

But there's a lot more the Chinese zodiac than basic personality traits. Read the next page to learn how elements play into each person's particular sign.

The Structure of the Chinese Zodiac

In the Chinese calendar, two cycles are at work: the zodiac and the elements. The zodiac, as we know, is split into a 12-year cycle marked by different animals. There are also five elements that cycle through the Chinese calendar: metal, water, wood, fire and earth. These elements interact with the animals of the zodiac, giving each year a different characteristic. Like the animals, the elements have their own set characteristics which influence a person's sign. They are:

Aligning the five elements to the 12 animals or years of the zodiac creates 60 different combinations -- a complete cycle that lasts 60 years.

As you can see, understanding the Chinese zodiac requires an in-depth knowledge of how each cycle of the Chinese calendar operates and the meanings of the cycles' interactions with one another. Don't worry if you find it difficult to understand how all of these components connect. Lots of Web sites and books will do the work for you, matching up the day and year of your birth with its corresponding animal and element.

People turn to the Chinese zodiac to help them understand their own personalities, behaviors and even how they might interact with others. For example, if your animal is the tiger and you're in a relationship with someone who was born in the year of the rat, the Chinese zodiac suggests that you two will have trouble getting along at times as you both compete for attention. If you take this astrological system seriously, you may even consult the zodiac to help you determine which people would make the best match for you.

The date of the Chinese New Year changes each year. In 2011, for example, the Chinese year began on February 03, and in 2012 it started on January 23.