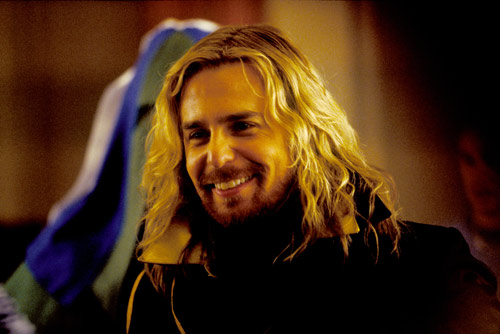 The Hitchhiker's Guide to the Galaxy TV series first aired on the BBC in 1981. Directed and produced by Alan Bell, it was, for the time, a lavish effects-drenched production.

18.) In a later episode of the TV series, the very tall bodyguard who keeps Ford away from galactic rock star Hotblack Desiato is none other than Dave Prowse - the body of Darth Vader in the original Star Wars films. The Hitchhiker's producers initially wanted the actor who portrayed the flaccid, annoying and vaguely girlie aspects of Darth Vader's personality, but Hayden Christensen wasn't available.

19.) The TV show's computer graphics were created by Rod Lord at Pearce Studios. These visuals were groundbreaking for the time and drew quite a bit of attention to the show. The funny thing is that they aren't actually computer-generated at all. Lord created these effects by animating reversed-out line drawings on acetate. He used lighting gels (the type used in production lighting) to create the colors for the sequences.

was born on March 11, 1952 in Cambridge, Cambridgeshire, England, UK. After graduating from school, Adams did some youthful wondering trying to figure out his place in life. During this time, he had many odd jobs. Perhaps the two most interesting are -- chicken shed cleaner and bodyguard for a royal Arab family.

Early in his career, Adams was a script editor and writer for Dr. Who and had contributing writer credit for one episode of Monty Python's Flying Circus. In addition to The Hitchhiker's Guide to the Galaxy series, Adams also wrote several fiction and non-fiction books. Adams was deeply interested in technology and tinkered with the production of several video games including The Hitchhiker's Guide to the Galaxy video game.

While working out at a gym, died on May 11, 2001 of a heart attack. He was 49 years old. He was finalizing the script for the film at the time of his death. He is survived by his wife Jane Belson and his daughter Polly Ann Adams (who appears in a crowd scene in the new feature film).