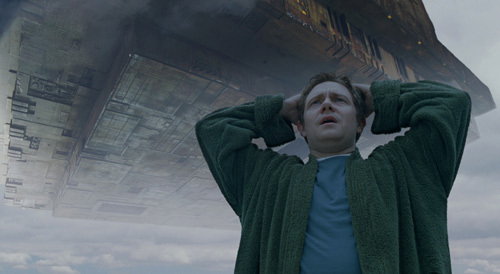 On February 4, 1977, the series creator Douglas Adams met with BBC Producer Simon Brett, who at the time was doing BBC Radio 4's The Burkiss Way. After the meeting, Brett agreed to help Adams pitch a science fiction comedy radio show to the BBC. This was the birth of The Hitchhiker's Guide to the Galaxy.

2.) Adams' original concept was called The Ends of the Earth. The idea was that at the end of each show, the Earth would be destroyed in a new and interesting way.

3.) As the story developed, Adams created the alien character Ford Prefect. Prefect, a writer for a galactic travel guide, was to provide context for the audience and a detached non-Earthling perspective. Adams eventually reworked the concept to center on this guide.

4.) The main character's name was changed from Aleric B to Arthur Dent during a taxi ride to the BBC pitch meeting.

5.) The first episode aired on BBC Radio 4 on Wednesday, March 8, 1978, at 10:30 pm. The first series contained six episodes that the show's production team referred to as "fits."

6.) An audio version of The Hitchhiker's Guide was released on vinyl in 1979. It was a condensed version of the first four radio episodes. For legal reasons, it was a completely different recording than what the BBC broadcast on the radio. The music used on the radio broadcasts could not be distributed commercially without paying licensing fees.

7.) The Hitchhiker's Guide to the Galaxy radio series was often praised for its grounbreaking sound effects. Adams was passionate about giving the show's sound the same production value as a modern rock album. The Hitchhiker's series was the first comedy radio show on the BBC to be broadcast in stereo.

8.) The radio series earned Adams critical acclaim. In 1978 Adams won the Imperial Tobacco Award. He received the Sony Award in 1979 and the Society of Authors/Pye Awards "Best Programme for Young People" in 1980. The Hitchhiker's radio series was also the only radio show to ever to be nominated for the Science Fiction Achievement Award ™, also known as the Hugo Award®.

9.) Marvin the Paranoid Android was originally written as a one-time joke for the radio series. But after his debut, Marvin became an instant fan favorite. The show's producer at the time, Geoffrey Perkins, urged Adams to develop Marvin into one of the series' main characters.

10.) In September, 2004, the BBC aired the new Tertiary Phase episodes of The Hitchhiker's Guide to the Galaxy on BBC Radio 4. Prior to his death, Adams had started working with Dirk Maggs to adapt books three through five of the "trilogy" for radio broadcast. After Adams' death, Maggs used Adams' notes to finish writing and directing the last two segments of the series, titled the Quandary Phase and the Quintessential Phase. The two new phases are slated to be broadcast on the BBC in late 2005 and will wrap up the story arc.

11.) In the BBC broadcast of the Tertiary Phase, Douglas Adams posthumously portrays the angry, Arthur-Dent-hating character Agrajag. Maggs did this by editing together recordings of Adams reading from his books.