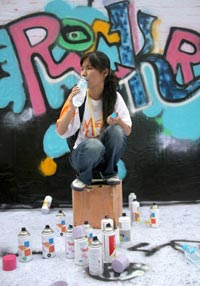 A little international travel will quickly show you that hip-hop has gone global. From Brazil to England to France to Japan to India to South Africa, young (and some old) people are finding a voice, a sense of style and even a sense of self in hip-hop. While it might appear as though people have shallowly appropriated the style and sounds and aren't truly feeling the movement, this isn't necessarily so. Sure, there are those -- what some Americans would call imitators or wannabees -- who are merely moving through the elements of hip-hop on their way to the next Western pop culture import, but others are integrating the movement into their own local situation.

In an article titled "Japanese Hip-Hop and the Globalization of Popular Culture," Ian Condry mentions how strange it can be to fly from New York to Tokyo and find teens decked out in the same hip-hop style as those he just saw in the United States. But he points out that, while everything seems the same, it's not. The borrowed hip-hop culture is imbued with local cultural dynamics. The local b-boys and b-girls have added their regional flavor to the mix [source: Condry].

In Italy, where hip-hop culture and rap music have had a strong and growing following for more than two decades, rappers rhyme in their local dialects. According to a New York Times article, "Nearly 50 percent of all Italians still speak in dialect, at least within the family, and the musicality of most dialects adapted well to the rhyme and cadence of rap." The subject of Italian rap music, while more recently is concerned mostly with love and other conventional topics, has included everything from the Mafia to government corruption to homelessness to drug addiction -- in Italy, not New York [source: Povoledo].

Musical movements have made their way across geographical divides before, but hip-hop is more than just music -- it's a way of life that encompasses physical movement and personal expression. As S. Craig Watkins writes, "Yes, hip-hop has been an astonishing moneymaker, but it has been an equally astonishing source of youth expression and empowerment" [source: Watkins].

Hip-hop's wide reach is also tied to the commercialization of the movement. Watkins points out that record companies, fashion labels, sports franchises, and even food and beverage companies are all selling their products by advertising the hip-hop lifestyle, and how their shoes, soda or sandwiches fit into it.

Another key element that's helping spread the hip-hop word is the Internet. At no other point in history have people living in such disparate circumstances and in separate points of the world been able to come together to communicate like they can today. One Web site, Global Grind, aims to be the "ultimate online destination for the hip-hop community" [source: Global Grind]. Navarrow Wright's baby is backed by some heavy hitters, one from hip-hop and one from the online community: Russell Simmons' Island Def Jam Music Group and Facebook investor Accel Ventures [source: Holahan].

Global Grind isn't the only hip-hop hotspot on the information superhighway. Other hip-hop-minded social networking sites include BlockSavvy and DanceJam. BlockSavvy is like MySpace. DanceJam, which is co-founded by MC Hammer, goes a step beyond social networking and includes slow-motion dance tutorials. The site plans to launch regional features, which could have a huge impact on dance styles around the globe. Reportedly, the site's founders hope that eventually its users will "be able to look up any major city on DanceJam and learn the hottest moves in the area before booking a trip" [source: Van Buskirk]. Visiting the site could give a completely new meaning to the old catchphrase, "It's Hammer time!"

For more on hip-hop, music and related topics, see the links on the next page.