Breakdancing in the 80s 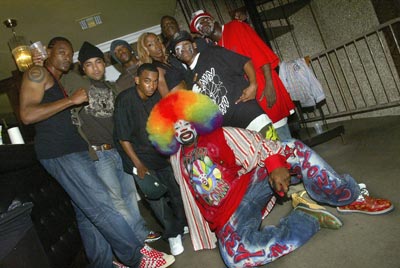 Matthew Simmons/Getty Images
Krump dancers from the documentary "Rize" pose with Tommy the Clown backstage at the launch party for the "Rock This Way" tour on June 29, 2005 in Hollywood, Calif.

By the mid 1980s, breaking was everywhere. The films "Wild Style," "Style Wars," "Breakin'," "Beat Street" and "Flashdance" all included breaking. During the 1984 Summer Olympics, breaking punctuated Lionel Richie's performance. Michael Jackson brought moonwalking (known as backsliding among the dancers who invented it) to the masses. Advertisers also took advantage of the dance craze -- everything from fast food restaurants to clothing lines used breaking as an ad backdrop.

Soon, it became more than a dance craze; it was a commodity. While some dancers were making money, they weren't the ones getting rich. Business-minded folks jumped into the fray with hip-hop clothing lines, guidebooks, video games, kneepads, special dance mats and other breaking-related items. According to a 1984 TIME magazine article, Wrangler was set to launch a collection called "Wrapid Transit," and Van Doren Rubber was putting out a special version of its Vans wrestling shoe designed especially for breaking [source: Koepp].

The breaking frenzy started to die down in the late 1980s. While it had disappeared from mainstream America, it wasn't entirely gone. Other hip-hop dances came to the fore and receded again. And then, in the mid to late 1990s, there was a resurgence in the popularity of breaking in the United States, and it has stayed within sight ever since. However, it's now part of a larger mix of hip-hop dancing. While some practitioners stay true to the old-school style, many incorporate other styles from the past and present, including popping, locking, funk, house, freestyle and more.

One of the newer hip-hop dances is krumping. Mentioned more than a few times on season three of the hit TV show "So You Think You Can Dance," krumping combines breaking, clowning, modern dance and even tap. If you'd like to see the moves firsthand, you can check out "Rize," David LaChapelle's "musical documentary."

In the same way hip-hop music inspired hip-hop dance, hip-hop dance styles have had an impact on another element -- hip-hop fashion. Read on to find out why suspenders weren't just for Robin Williams in the 1970s and who was sporting Kangols before Samuel L. Jackson.