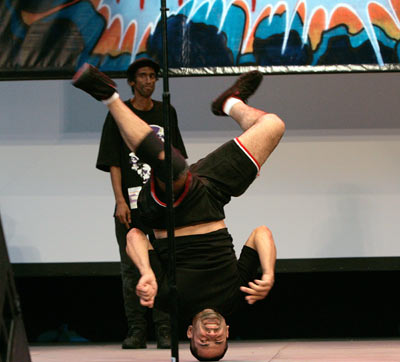 Depending on how old you are, when someone says "hip-hop dance," you could picture the boogaloo, locking, popping, freestyle, uprocking, floor- or downrocking, grinding, the running man, gangsta walking, krumping, the Harlem shake or chicken noodle soup. And, of course, you could think about breaking, also called breakdancing.

Some of breakdancing's more memorable moves include headspins, handspins, backspins, the windmill (the breaker spins around on his upper body with his legs whirling around above him like the blades of a windmill), the worm, and the suicide (a standing back flip that ends with the dancer flat on his back or bottom). While arguably not the first hip-hop dance form, it got lots of media attention at the start of the hip-hop movement.

To understand how breaking came to be, you have to do a little legwork. As with the music that inspired the dancing, breaking's history begins with the slave trade. Slaves carried a mix of traditions from many West African countries to North and South America. Several key elements of African-American dance appear in popular dance today, including all-over body movement, earth-oriented movement, improvisation and pantomime [source: Kansas City Lindy Hop Society].

Next came the Lin­dy Hop, followed by the Jitterbug, Savoy Swing and a number of other swing styles. Eventually, funk and disco were all the rage.

All of these styles have influenced modern hip-hop dancing, including breaking. But there were other influences as well. Afro-Caribbean dance was an inspiration, as was the Brazilian martial art form Capoeira. Other martial arts had a big impact, too. Kung fu films were a huge hit in the United States in the 1970s, so it's not a surprise that the movements of Bruce Lee and Jackie Chan were emulated and integrated into some of the earli­est breaking moves.

In an interview for The Source, Afrika Bambaataa suggests that breakdancing started among street gangs with a dance called "Get on the Good Foot" by James Brown. In the interview, Bambaataa, Kool Herc and Grandmaster Flash also discuss how dancers started placing bets with each other on skill. And, al­though the style of dance waxed and waned through the 1970s, several crews -- such as the Rock Steady Crew and the New York City Breakers -- kept breaking going and even took it to its next level, incorporating many of the highly acrobatic movements that would take center stage in the 1980s [source: George].