by Dave Roos
Prev NEXT
3

Cinematographer and Director of Photography 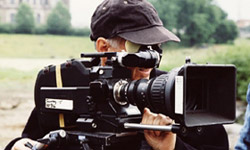 A cinematographer is tasked with capturing the director's vision on film.
Phil Hunt/Getty Images

A film could have the most talented screenwriter in Hollywood, the most visionary director and the hottest actors, but what ultimately matters is the image on the screen. If all of that genius doesn't get captured faithfully on film, then the project is a bust. That's why the best filmmakers invest in a top-tier cinematographer.