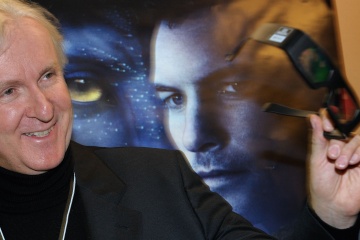 Like his colleague Peter Jackson, James Cameron is a fan of high frame rate 3-D. He’s using it for his upcoming sequels to “Avatar.”
©Fabrice Coffrini/AFP/Getty Images

Less than a decade ago, hardly any theaters had the digital projectors needed to show digital 3-D movies. Now there are tens of thousands of well-equipped theaters all over the world, but theater owners are once again faced with new technology, wondering whether they need to move to HRF-capable projection systems.

If Hollywood doesn't go all-in on high frame rate 3-D content, then there's no reason for theaters to invest in new equipment. As such, if you don't live in major metropolitan area, you may have to do some traveling to find a facility that supports HFR 3-D.

There's also the larger question of how long it will take studios to truly embrace HFR 3-D. To date, "The Hobbit" movies are the only ones to use this technology. Director James Cameron is expected to shoot HFR 3-D for two sequels to "Avatar" (which may even be shot at 60 fps), but beyond those two film franchises it's anyone's guess as to whether HFR 3-D will really take hold. At present, it is very much a fringe technology and it may never make permanent inroads into the industry.

If HFR 3-D is to triumph, movie production teams will have to get savvier and change their approach to maximize their impact. Makeup and costume artists, lighting teams and set builders will all need to expect that every minute detail of their work will be exposed onscreen. Special effects and computer-generated effects artists will face the same challenges. Directors will somehow have to balance the immense clarity of HFR 3-D with compelling narrative and be sure that the technology doesn't somehow overshadow the tale.

If they succeed, perhaps a nearly century-old film standard will finally fall by the wayside. If they fail, perhaps we'll be waiting for a new recording technology to somehow grab audiences in the way that 24 fps film does now.

Directors like Peter Jackson and James Cameron aren't content with sitting on today's technology. They see the infinite possibilities in the digital filming technologies and they want to blaze new trails in cinematography. As with all pioneers who smash against known boundaries, it's impossible to say whether they'll eventually make a new way forward in filmmaking or if other digital side roads will sidetrack HFR 3-D. Final answers are probably a long time coming — these movies take years to plan and shoot. But if ambitious directors can make critical and financial successes from their technological adventures, it's a good bet that HFR 3-D will stick around for a least a few more years.