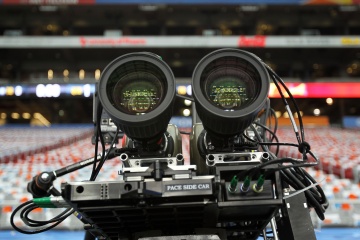 High frame rate 3-D cameras are being used to capture all the action at sporting events.
© Ronald Martinez/Getty Images

For many people the distinct look of 24 fps video is what makes movies cinematic. Purists who truly love the 24 fps film experience, complete with all of its blurring, stuttering and visible artifacts often decry high frame rate video. They say it looks too inorganic, too artificial, too cheap and too cold to relay the kind of emotional connection of film. It looks too much, they say, as if you are simply on a movie set or watching a behind-the-scenes documentary.

Digital proponents admit that there is a period of acclimation required for your eyes to get used to the clarity and lifelike scenes of high frame rate video. Once your eyes and mind get accustomed to the effects, they argue, there's no going back to film.

They liken this transition as similar to the shift from vinyl to compact disc. Although some music lovers say nothing beats the warm sounds from a spinning record, the technical perfection of digital formats is certainly more precise and, in hindsight, it's obvious which format won out.

Television broadcasts have been using frame rates at higher than 50 fps for decades. And with the advent of HDTV broadcasts, particularly with sporting events, it's clear that viewers love the high resolution, detail and sharpness of digital. It could be that these kinds of broadcasts will be a gateway of sorts for the expectations of a new generation of audiences. Perhaps if young people are weaned on higher frame rate productions, it will become a new normal and film will begin to look outdated and primitive by comparison.