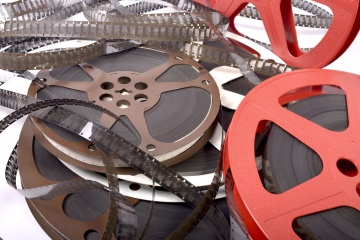 Calculating the budget for old-school film used to be a significant part of the moviemaking process. Digital media frees up filmmakers from that limitation.
© philipimage/ThinkStock

Film isn't free. Suppliers charge productions per foot of film, which is equivalent to about 18 frames. When crews shoot many feet of film per day, costs can skyrocket in a hurry. Thanks to reusable digital media, directors are now exploring high frame rate video, which can hit 60 or even 80 fps.

What's the point of higher frame rates? After all, researchers say that your eyes can't really distinguish between individual images at all once you go faster than around 50 fps. But at these rapid speeds you'll notice that scenes look crisper and that motion often seems to flow more smoothly.

You can see a simulated example of the differences at this website, and also at this Red camera corporate page. Notice the striking differences in motion blur and sharpness as frame rate increases.

Now, add those high frame rates to today's ever-improving 3-D technology and you start imagining the sort of retina-ravishing content that directors might be able to conjure. It's called high frame rate 3-D (HFR 3-D), and it typically refers to content shot at 48 fps or faster. It completely changes the look and feel of 3-D flicks.

That's in large part thanks to the fact that 3-D movies are often challenging to watch, even for people with strong stomachs. It all has to do with the physics of light. If you're not up to speed on how 3-D works, be sure to read How RealD 3-D Works and How is digital 3-D different from old 3-D movies?

In short, because you have two eyes with two slightly different perspectives on your environment, movies shot in 3-D must have two cameras, too. Each camera captures data that will be seen by either your left or right eye. The polarized glasses you wear in the theater act as a decoding device of sorts, each allowing only the visuals intended for the appropriate eye. Your brain then fuses the images together into an illusion of 3-D.