Browse the article Inside 'Heroes' 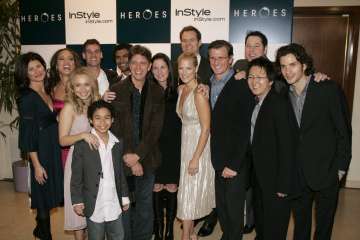 "Heroes" was one of the most popular TV shows of the 2006-2007 season. Go inside the TV show "Heroes" and find out what made "Heroes" so successful. See more TV show pictures.
Photo courtesy NBC Universal Media Village

Superheroes and supervillains, quirky characters, movie-quality effects and suspenseful plots with unexpected twists made "Heroes" the watercooler hit of the 2006-2007 TV season. It racked up eight Emmy nominations, including Best Drama Series, and attracted a huge following to its take on good versus evil.

"Heroes" has spawned a comi­c book, video game, Web serial and a spring 2008 spin-off called "Origins" while getting America -- and fans in nearly 150 countries -- hooked on the adventures of an indestructible cheerleader, a Japanese time-traveler and an exotic dancer with a very split personality.

Now, as its second-season premiere approaches (Sept. 24 on NBC), "Heroes" carries the pressure to match, if not outdo, its stellar freshman year. The premiere episode is titled "Four Months Later," segueing from the season one finale.

"I'm never 100 percent satisfied with anything, but I was pretty pleased that we were able to wrap up that much story and give ourselves enough of a blank slate to start the season with," says series creator Tim Kring.

But much was still in doubt at the end of the season one finale, including the fate of Peter Petrelli (Milo Ventimiglia) and D.L. Hawkins (Leonard Roberts). Kring won't comment on their status, but he does make it clear that there will be major shakeups in the lives of returning superheroes and a long list of new characters joining the "Heroes" universe.

In this article, we'll find out what's in store for season two. Is Jessica gone for good? Will Matt find his pregnant wife? Will Hiro make it back from the past? But first, we'll learn about the creation of the series' amazing special effects. 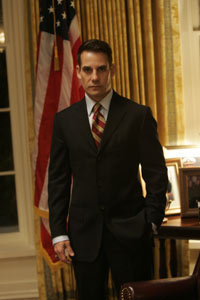 "Heroes" used more than a thousand special effects in its first season. One of the most complicated episodes was "Five Years Gone," a jump into the postapocalyptic future.

The special effects department needed to produce two very different Manhattan landscapes and multiple superpower effects for "Five Years Gone." It also had to depict Nathan Petrelli (Adrian Pasdar) in front of the White House and at Ground Zero before having him fly across the New York skyline.

Artists rendered postnuclear Manhattan in a matte painting of 3505 by 2785 pixels that included animation for moving vehicles, airplanes and construction cranes. To allow the character of Hiro Nakamura (Masi Oka) to interact with his future self, the four-and-a-half minute scene was filmed in four passes in 35mm using a motion-control dolly and a Hot-Head -- a remote-control camera head.

For the scene in which President Petrelli heads for his helicopter on the White House lawn, Pasdar walked in front of a blue screen, which was composited with a computer-generated model of the White House rendered at 2922 by 1644 resolution and enhanced with matte-painting additions of surrounding greenery.

Petrelli's appearance at a Ground Zero memorial service required green screen, matte paintings and numerous CG elements. His solo flight in the next scene involved more than 200 hours of work from 3-D artists, matte painters and the compositor. The compositor created a green-screen model of Pasdar and a CG model (made with Maya Cloth simulator software) and put them together with crowd elements, a matte painting of the memorial site and an animation of the jet's exhaust trail.

The episode's technical challenges also included Peter Petrelli (Milo Ventimiglia) exercising the power of invisibility, which was achieved through split screens, rotoscope and glass distortion filters. A similar process (but with a CG ripple effect instead of a distortion filter) was used to show Sylar (Zachary Quinto) walking through walls. For the showdown between Peter and Sylar, special effects artists used Lightwave software to create animated CG fire and ice elements.

Split screens and rotoscoping illustrated frozen ­time, and when it was necessary to show actors in off-balance positions, rigs propped them up and were removed in postproduction. Finally, to create a wraparound view of present-day Manhattan, artists utilized a 270-degree matte painting, Boujou tracking software and green-screen and CG elements.

Hayden Panettiere, whose character, Claire Bennet, is constantly defying death, has spent considerable time with the special effects department, mostly for makeup and prosthetics. One episode, "The Homecoming," was particularly rough -- she spent six hours having burns simulated and getting a body scan for CG. In another episode, Claire is ­autopsied, which was achieved via a prosthetic placed on Panettiere's chest. She remembers walking around with blood dripping everywhere. "I'm like a piece of steak," she says. "I've been broiled and filleted."

On the next page, we'll find out what your favorite characters will be up to in season two -- and get a sneak peek at some new faces.

If a script calls for a painting, prop master Ross Anderson calls artist Tim Sale, who provided all the paintings for killed-off painter Isaac Mendez (Santiago Cabrera). "I need to know what to put in the picture, the time of day, what people are wearing," Sale says. "It works best if they have filmed it first, but they don't always have the time to do that."

Sale, who is color-blind, works in black and white, and a colorist fills in the hues. "There's a lot of back-and-forth," Tim Kring says, "but with e-mail we're able to see JPGs for his progress as he works on them."

Sale has also contributed to "Heroes" in another creative way -- the font in the credits was created from his handwriting.

If you're a "Heroes" fan, you're probably on the edge of your seat waiting for the lowdown on the new season. Here are some tidbits to tide you over until Sept. 24.

Quite a few new characters will be joining the "Heroes" ranks this season. Here's a look at a few of them:

The Heroes of 'Heroes" 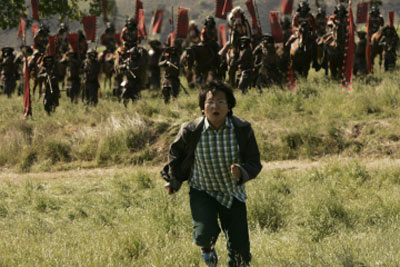 Masi Oka as Hiro Nakamura in the season one finale of "Heroes"
NBC Photo: Chris Haston

As the season unfolds, the "Heroes" characters will be scattered around the globe -- in Japan, Mexico, Egypt, Haiti, Central America and the Ukraine.

As the season one finale set up, Hiro Nakamura (Masi Oka) has teleported to feudal Japan. "We're going to be there for a while," says Oka, an Emmy nominee for Best Supporting Actor in a Drama Series.

"The whole idea of Season Two is that we're going to start with two separate time lines," he says. "One time line is going to start four months after the event [in the finale] happened, and the other storyline starts with Hiro 400 years in the past."

Oka also reveals that he has been working with some new cast members, including Eriko Tamura, a Japanese actress and pop star who plays a Japanese princess. David Anders (formerly of "Alias") plays samurai warrior Takezo Kensei, Hiro's childhood hero and the original owner of his precious sword. George Takei will also return as Hiro's father.

"Origins," the new spin-off series created by Kring, will start airing after season two of "Heroes" ends in April 2008. A new character will be introduced in each of the six stand-alone episodes, and viewers will decide which of them will remain for season three of "Heroes." Kevin Smith (of "Clerks" and "Mallrats" fame) is on board to direct the first episode.

Kring sees "Origins" as a sort of farm system for new characters. "Rather than it being like a tank of gas where you use up story, these twists and turns and reveals and cliffhangers actually generate more story," he says. "So it's an engine that feeds on itself."

"[They're] disconnected from the main storylines of Heroes but in the same world," says Masi Oka. "You might see a mailman deliver a piece of mail to Mr. Bennet's house, which we know has burned down."

There was one interesting alteration to the pilot episode in the seven-disc "Heroes: Season 1" DVD boxed set. In the original version, an Emerson Electric InSinkErator garbage disposal mangles Claire Bennet's hand. Emerson Electric filed a lawsuit --­ and even though the case was dropped when the parties settled out of court, NBC deleted the company's ­trademark from all future presentations. 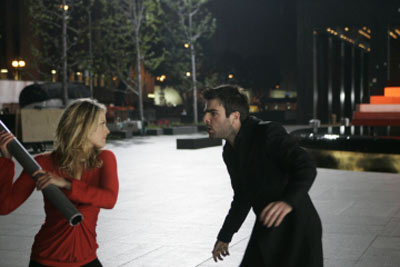 Niki (Ali Larter) and Sylar (Zachary Quinto) have a showdown in the final episode of season one.
NBC Photo: Trae Patton

Tim Kring, previously best known for creating the series "Crossing Jordan," says he had wanted to write a show like "Heroes" for years, but serialized dramas with large ensemble casts didn't usually rerun or syndicate well. "But with the advent of shows that did well and DVD sales, it became more attractive to the networks," he says.

The "Heroes" premiere in September 2006 drew 14.3 million viewers and was the highest-rated NBC drama debut in five years. After the blockbuster first season and all the hype and Emmy nominations, it would certainly be understandable if the "Heroes" cast were nervous about the new season. They've certainly heard of the sophomore slump, right? But according to the actors, there's not a worry in sight on the Hollywood set.

The "Heroes" pilot that aired in 2006 was not the original version. The original included Matt Parkman, who was ultimately introduced in episode two, and a radioactive character called The Engineer, whose powers were later transferred to Ted Sprague (Matthew John Armstrong). A terrorism subplot involving an extremist's suicide was also excised from the pilot when NBC deemed it unsuitable for family viewing in the 8 p.m. time slot. 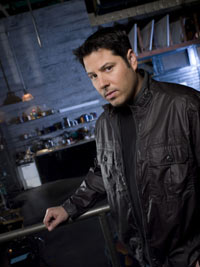 Many of the "Heroes" cast members are now hot commodities in Hollywood. Here's what else they have on tap.

Grunberg plays an agent trying to stop drug dealers in "Fast Glass," due out next year. In his spare time, he plays drums in Band From TV, alongside actors James Denton ("Desperate Housewives"), Hugh Laurie ("House"), Bonnie Somerville ("Cashmere Mafia") and Bob Guiney ("The Bachelor").

First up is a cameo in the fall indie "Quebec," a comedy about two real estate agents (Jenna Fischer and Seann William Scott) competing for a job. Oka is also in the cast of the movie version of the TV series "Get Smart," starring Steve Carell, Anne Hathaway and the Rock, due out June 20, 2008.

Next year, Panettiere stars in the family drama "Fireflies in the Garden" with Julia Roberts, Willem Dafoe, Ryan Reynolds and Emily Watson, and she has been recording an album for Hollywood Records.

Pasdar stars in the indie thriller "Home Movie" as a Lutheran minister who thinks his children may be possessed.

He'll don pointy ears to play the young Spock in the J.J. Abrams-directed 11th installment in the "Star Trek" franchise, slated for a Dec. 25, 2008, release. Leonard Nimoy is expected to appear as the elder version of the Vulcan.

In "Ball Don't Lie," Ramirez plays the foster parent of a teenage basketball player. And she's on the run -- this time in subway tunnels -- in the thriller "Brooklyn to Manhattan," about a drug deal gone bad.

After directing and producing "It's a Mall World," a series of 12 original short films for American Eagle and MTV, Ventimiglia returned to acting, playing a forensic pathologist in the thriller "Pathology," which hits theaters Nov. 30.

For more information about "Heroes," check out the links on the next page.